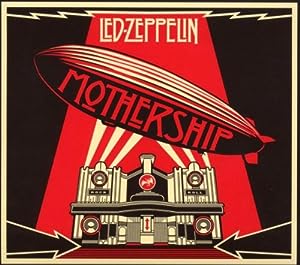 $20.94
As of 2021-06-12 01:00:56 UTC (more info)
Not Available - stock arriving soon
Buy Now from Amazon
Product prices and availability are accurate as of 2021-06-12 01:00:56 UTC and are subject to change. Any price and availability information displayed on http://www.amazon.com/ at the time of purchase will apply to the purchase of this product.
See All Product Reviews

It's rare that a group can truly rock today's world, but the arrival of "Mothership," the first-ever comprehensive Led Zeppelin compilation, qualifies. Produced by Jimmy Page and mixed by Kevin Shirley, "Mothership's" 24 monolithic tracks were selected and sequenced by the band, who also oversaw the painstaking remastering. Spanning their epic career, the unprecedented collection pulls immortal songs from all eight of the band's classic studio albums, one of the 20th century's most enduring bodies of musical work. The Deluxe 2CD/1DVD edition includes a DVD with the Premiere Version of the Led Zeppelin DVD, which was shown in theaters

For years, as playlists and multidisc players put Led Zeppelin tracks into a mix, there was a perpetual need to adjust the volume when Zep came on. Their tunes languished in the haze of substandard remastering--until now, at least for the 24 tracks on Mothership and the final fullness of the new Song Remains the Same reissue. For its part, Mothership's crisper, warmer audio owes its heft to the troika of Robert Plant, Jimmy Page and John Paul Jones, who helped oversee the mastering, bringing out untold shades even in the throes of "Heartbreaker" and the sinews of "No Quarter." It's an impressive sonic leap. Where tinny high-ends and muffled lows used to co-exist, fatter and louder depths prevail. It's ever more astonishing that Zep got on with just four blokes. You can quibble with the 24 tracks here (where's "The Ocean"?), but the band picked each track here, from the stone-cold locks ("Communication Breakdown" and "Stairway to Heaven," no, duh) to the robust throb of "When the Levee Breaks." As for "The Ocean," you can find that in fantastically full form, along with five other gems on the newly remastered Song Remains the Same, which shows up for 2007's holiday season on DVD, too. Only rarely have four lads from England made so memorable an auditory and visual blast. --Andrew Bartlett

only $3.55
Not Available
View Add to Cart