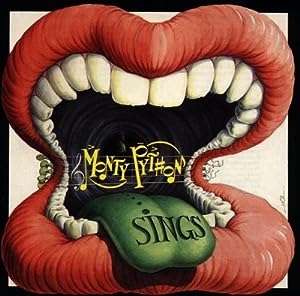 $9.99
As of 2021-04-15 17:41:25 UTC (more info)
Not Available - stock arriving soon
Buy Now from Amazon
Product prices and availability are accurate as of 2021-04-15 17:41:25 UTC and are subject to change. Any price and availability information displayed on http://www.amazon.com/ at the time of purchase will apply to the purchase of this product.
See All Product Reviews

Years of sidesplitting songs from Flying Circus and Python movies are distilled into one 25-track CD: Always Look on the Bright Side of Life; Sit on My Face; Lumberjack Song; Every Sperm Is Sacred; Spam Song; Bruce's Philosophers Song; Brian Song , and more!

Though this seminal British comedy team is better known for authority-tweaking absurdist wordplay and surrealist visual hijinks, music has always been an essential element in the troupe's twisted universe. Monty Python Sings collects 25 musical Python nuggets from the team's album catalogue, including such beloved ditties as "Always Look on the Bright Side of Life," "Lumberjack Song," "I'm So Worried," "Spam Song," "Bruces' Philosophers' Song," "I Like Chinese," and "Knights of the Round Table." With so much Python music gathered in one place, it's impressive to note just how many of the sextet's musical excursions have become cult classics. --Scott Schinder

In Search Of Freedom: Excerpts From His ...