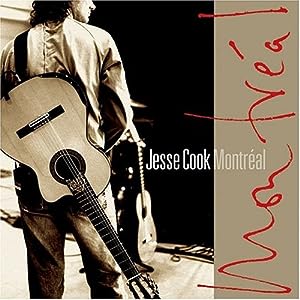 $49.75
As of 2023-02-02 01:31:41 UTC (more info)
Not Available - stock arriving soon
Buy Now from Amazon
Product prices and availability are accurate as of 2023-02-02 01:31:41 UTC and are subject to change. Any price and availability information displayed on http://www.amazon.com/ at the time of purchase will apply to the purchase of this product.
See All Product Reviews

Jesse Cook is a worldbeat musician in the truest sense of the word; he doesn’t just pick a style and repackage it, he is respected both by listeners and players alike for constantly seeking inspiration and tutelage from all over the world. A longtime fan of music from Spain, Africa, Egypt, Brazil, France and Cuba, Jesse Cook’s Montreal evokes each of those countries and then some on this, his sixth CD and first live disc.

Cook has a history of hooking up with talented players; previous contributors to his million-selling catalogue include cellist Ofra Harnoy, fellow Canuck Holly Cole, and Brazillian jazz phenom Flora Purim. His choice of players for Montréal are equally talented; that point is made clear right from the opening cut, "Beloved." Fellow Canadian, Maryem Tollar sets the stage with her incredible, ghostly Arabic vocals; from that romantic, moody brilliance right to the disc’s undulating climax of "Baghdad," the perpetual motion of Gypsy Kings-meets-Cirque du Soleil sounds resonate throughout the disc. The audience’s adoration of the performer and his wonderfully percussive live show (recorded at Le Festival International de Jazz de Montréal) allows the feverish applause to carry the enthusiasm over to the live disc itself.

There will always be a debate among purists as to whether accessible worldbeat or jazz is too easy-listening; ultimately, Cook is one part gifted guitar player, another part masterful showman. Even in the context of listening to a live CD, the energy that he gives to and subsequently receives from his fans on Montréal is contagious and musically rewarding.--Denise Sheppard