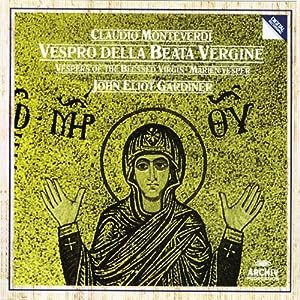 $23.00
As of 2021-10-19 15:29:45 UTC (more info)
Not Available - stock arriving soon
Buy Now from Amazon
Product prices and availability are accurate as of 2021-10-19 15:29:45 UTC and are subject to change. Any price and availability information displayed on http://www.amazon.com/ at the time of purchase will apply to the purchase of this product.
See All Product Reviews

John Eliot Gardiner's 1974 recording of Monteverdi's extraordinary Vespers of 1610 was a landmark, helping establish the modern reputations of both music and conductor. In 1989, to celebrate the silver anniversary of his Monteverdi Choir (named in honor of this work), he recorded the cycle again--this time live in the Basilica of San Marco in Venice. He made use of resources he didn't have 15 years earlier, like period instruments and, for soloists, a mix of early-music specialists (Ann Monoyios and Michael Chance) and opera singers (the young Bryn Terfel). As a bonus, he recorded both the standard version of the Magnificat for voices and instruments and Monteverdi's published alternative setting for six voices and organ. Gardiner gives a vigorous, theatrical, yet very detailed account of this music, caressing some phrases, thundering out others, using lots of carefully judged crescendos and decrescendos. On its terms, it works, thanks largely to the wondrous Monteverdi Choir, which can do anything asked of it. But there seems little of the sacred in the performance and almost nothing of the spontaneous or natural--the carefully calibrated effects can come across as overdetermined. In his booklet essay, Gardiner makes quite a point of his fidelity to the published score, yet he liberally adds instruments to double the voices, and he takes an odd liberty with the much-loved duet-trio "Duo seraphim": at the close of each half of the motet, at the words "plena est omnis terra," he has the tenors of his chorus take over from his soloists. If you're uncomfortable with that sort of thing, go for Andrew Parrott's marvelous one-singer-per-part performance or (for those who want a full chorus) for the version of William Christie or that of René Jacobs; if these additions don't faze you and you want a high-powered, adrenaline-rush performance, you'll find it here. --Matthew Westphal