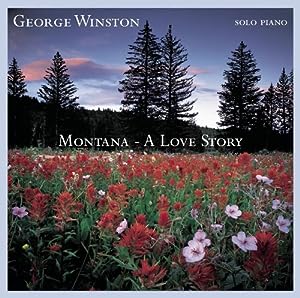 $5.55
As of 2022-11-25 19:26:06 UTC (more info)
Not Available - stock arriving soon
Buy Now from Amazon
Product prices and availability are accurate as of 2022-11-25 19:26:06 UTC and are subject to change. Any price and availability information displayed on http://www.amazon.com/ at the time of purchase will apply to the purchase of this product.
See All Product Reviews

From the opening piano notes of Montana: A Love Story, George Winston fans are sure to feel they've returned to safer ground after his last album, The Night Divides the Day, the pianist's dip into the acid rock of The Doors. There's nothing on Montana that wouldn't feel at home to anyone who has followed him since his first two albums on Takoma and Windham Hill records. Winston has carved out a space for open-air melodies that seem to echo off the Montana plains that have provided so much of his metaphorical imagery over the years. It's an attractive sound which, at its best, recalls Keith Jarrett's more contemplative ruminations, and at its worst, sounds like cocktail music by someone without a good fake book. The pure Winston sound can be heard on his originals, including "High Plains Lullaby," as well as covers like Mark Isham's childlike "Thumbelina." But Winston also plays Celtic tunes, Sam Cooke's R&B hit, "You Send Me," and Leadbelly's "Goodnight Irene." And just to put you on edge, he does Frank Zappa's angular "The Little House I Used to Live In." He says it reminded him of the little house in which he grew up in Montana. When he explores these different styles, he becomes a more generic pianist, the kind you might hear at the local shopping mall. But on the reverie of "Sweet Soul" and the exoticism of "Sky," the distinct Winston sound is revealed as he continues to forge his brand of American Plains piano. --John Diliberto

only $6.56
Not Available
View Add to Cart