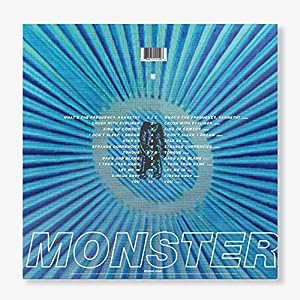 $25.61
As of 2020-04-05 14:11:48 UTC (more info)
Not Available - stock arriving soon
Buy Now from Amazon
Product prices and availability are accurate as of 2020-04-05 14:11:48 UTC and are subject to change. Any price and availability information displayed on http://www.amazon.com/ at the time of purchase will apply to the purchase of this product.
See All Product Reviews

- Featuring the hits: "What's the Frequency, Kenneth?," "Bang and Blame," "Crush With Eyeliner" and more

- Plus new liner notes, featuring interviews from members of the band

R.E.M.’s ninth album, Monster, was released at a time when the band were coming off the peak of their mainstream success, following Out of Time (1991) and Automatic For The People (1992). Coming from a long break in touring (the band famously didn’t tour with the two previous records), Monster represented an intentional shift in R.E.M.’s sound, a “return to rock” with guitar laden, simple arrangements. It was released to strong reviews and significant global success - reaching #1 on Billboard, and least 7 other countries. In 1995 the band promoted that album with their first concert tour since 1989 (although several band members suffered health problems). The album includes the singles; “What’s The Frequency, Kenneth?,” “Crush with Eyeliner,” “Bang and Blame,” and “Strange Currencies.”