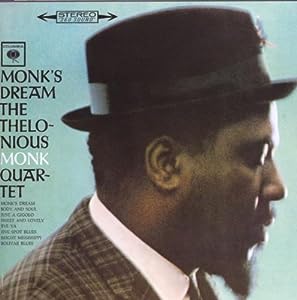 $7.17
As of 2022-01-22 02:10:48 UTC (more info)
Not Available - stock arriving soon
Buy Now from Amazon
Product prices and availability are accurate as of 2022-01-22 02:10:48 UTC and are subject to change. Any price and availability information displayed on http://www.amazon.com/ at the time of purchase will apply to the purchase of this product.
See All Product Reviews

Originally released in early 1963, Monk's Dream was the first Thelonious Monk album for Columbia. At the time this was recorded (fist sessions on Halloween, 1962), he had become one of the preeminent figures in contemporary jazz. His move to Columbia put him in the company of a couple of the era's other major talents and commercial successes, Miles Davis and Dave Brubeck, and his quartet was stabilized for a couple years with tenor saxophonist Charlie Rouse (with him since 1958), bassist John Ore, and drummer Frankie Dunlop. This album set the format for his succeeding works for the label over the next half-dozen years: a few standards mixed with originals, most of which had been recorded earlier in his career (the only new composition is "Bright Mississippi," itself a variation on the chordal structure of "Sweet Georgia Brown"). However, these performances find Monk in exuberant good cheer. His playing sparkles with invention and the relaxation and calm of a career in well-deserved ascension. Critically under-celebrated in its day, Monk's Dream is rich with the confidence of a band at its peak. --David Greenberger