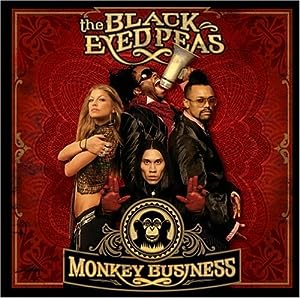 $3.30
As of 2021-07-21 20:15:59 UTC (more info)
Not Available - stock arriving soon
Buy Now from Amazon
Product prices and availability are accurate as of 2021-07-21 20:15:59 UTC and are subject to change. Any price and availability information displayed on http://www.amazon.com/ at the time of purchase will apply to the purchase of this product.
See All Product Reviews

'Monkey Buisness' features 16 tracks, including collaborations with godfather of soul James Brown ("they don't want music"), Justin Timberlake ("My Style") and Sting ("Union"), 'Monkey Business' Spans a hip-hop spectrum from pop to surf to soul. Recorded in Los Angeles, New York, Piladelphia, London, Miami and even the peas' tour bus and a Japanese bullet train! The album was produced largely by Will.i.am. The first single 'Don't Phunk With My Heart' samples Lisa Lisa & The Cult Jam's 'I Wonder If I Take You Home'. AM. 2005

As with their last hit, Elephunk, Black Eyed Peas' new disc Monkey Business is a joyful cross-genre journey with musical props to hip-hop, rock, folk, funk, and pop. The reason the Black Eyed Peas have audience appeal that crosses over many styles is because the band members are such obvious fans of diverse music. Nowhere is this more apparent than on Monkey Business’s high-profile guest list. After Justin Timberlake’s contribution to the massive "Where Is the Love" breakout hit from Elephunk, their inclusion of big names once again was a smart, respectful move on the part of the band as well as their guests. "My Style" is Timberlake’s BEP foray number two; while the song is funky pop fun, those looking to hear Justin in the forefront are likely to be disappointed, as his vocals are mixed evenly, no sweet soulful solos this time. Other guests of note are Jack Johnson, who cowrote the bling-bashing "Gone Going," Sting on "Union" (sonically inspired by the former Police-man’s "Englishman in New York"), while funk legend James Brown contributes to a scorching soul track dubbed "They Don’t Want Music." The contribution of female vocalist Fergie--who joined the band partway through their last CD--has raised up considerably on the band’s fourth disc, their second as a quartet. Sassily fronting her way through songs like "My Humps," the "Hey Mama"-esque "Dum Diddly" and the first single "Don’t Phunk With My Heart," Fergie’s melodic contributions make for a record that will likely be heard by wider audiences than ever, making this a truly accessible ‘hip-pop’ CD. --Denise Sheppard

The Best of Sade