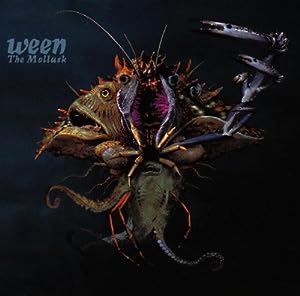 $13.68
As of 2022-12-03 01:08:35 UTC (more info)
Not Available - stock arriving soon
Buy Now from Amazon
Product prices and availability are accurate as of 2022-12-03 01:08:35 UTC and are subject to change. Any price and availability information displayed on http://www.amazon.com/ at the time of purchase will apply to the purchase of this product.
See All Product Reviews

Bruce Springsteen used the Jersey Shore as the backdrop for his tragic-heroic tales of everyday people in nowhere places. Ween, as you might expect, have a slightly different take on the proud coastline between New York and Atlantic City, the place where they recorded much of their new album, The Mollusk. Gene and Dean are more interested in dead jellyfish, rusted beer cans, flotsam and jetsam, dirty syringes and other assorted detritus that washes up. As for the kind people who live near the water? Ween's only interested in the ones who lurk at amusement park freak shows--and even then, only the really twisted ones. The Mollusk was made between rounds of surf-fishing for bluefish and bass--both before and after the water pipes burst in their winter beach house/studio, leaving recording equipment adrift in an indoor flood. Naturally, the album sounds thoroughly soaked. This is Ween's 'wet' album, in much the same way last year's 12 Golden Country Greats was their Nashville album. Songs like "The Golden Eel" and "Ocean Man" mine the water motif quite literally, while the hilarious title track and "Polka Dot Tail" take it one step further, the first by aping the dopey Brit folk mysticism of Donovan's "Atlantis" and the second by lumbering whimsically like "Yellow Submarine." Other tracks, such as the opening ditty "I'm Dancing in the Show Tonight," are more impressionistically soaked: the piano notes sprinkle lightly, the tuba plods like a foot through mud, and the vocals warp as if they were accidentally thrown into the washing machine. Though they're good enough songwriters to play it straight and almost get away with it ("It's Gonna Be" sounds pulled from the Peter Cetera songbook), the Ween boys are at their best on songs like "Mutilated Lips," when they're foraging through the grotesque, the surreal, the outright nasty--anything that titillates their sick sense of humor. They're still guys who get off on weird sounds (such as "Pink Eye"'s vacuum cleaner melody and dog bark percussion) and wiener jokes ("Waving My Dick in the Wind"). And what's most fun for us is hearing how much fun it still seems to be for them. --Roni Sarig

Big Lizard in My Backyard

Jeff Dunham - Arguing With Myself

Be Thou Now Persuaded: Living In A Shake...