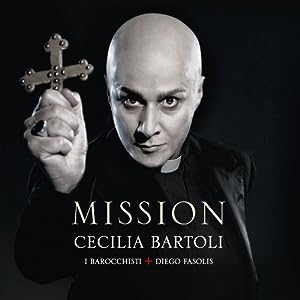 $11.88
As of 2021-07-28 16:43:12 UTC (more info)
Not Available - stock arriving soon
Buy Now from Amazon
Product prices and availability are accurate as of 2021-07-28 16:43:12 UTC and are subject to change. Any price and availability information displayed on http://www.amazon.com/ at the time of purchase will apply to the purchase of this product.
See All Product Reviews

Autumn 2012 marks the release of Mission, a sensational release from the world s best-selling classical artist Cecilia Bartoli and a project with international politics, religious conflict, diplomatic secrecy, spying and sensational music at its heart.
Following the exceptional artistic and commercial success of 2009 s Sacrificium (which earned Cecilia her fifth Grammy award), Cecilia Bartoli now turns to the early baroque period for the first time in her recording career and uncovers a treasure of beautiful music in an album almost entirely composed of world premiere recordings.

The album showcases the music of little-known Italian composer Agostino Steffani (1654 1728), and will include solo arias of various moods and styles, several duets, solo numbers with chorus - all sung in Italian - and instrumental interludes that create an organic transition from one piece to the next and an arc that reaches from the beginning to the end of the album.

Steffanis story is mysterious at the very least; his name is largely absent from studies of Italian music despite holding senior court positions during his lifetime and contemporary accounts acknowledging him as one of the greatest opera composers of the period and the acknowledged master of the vocal duet (Colin Timms, author of the booklet note).

Such was the appeal of the project that longtime Bartoli admirer and global best-selling author Donna Leon decided to write a mystery novel - Jewels of Paradise - to accompany Cecilia s album, which uses the mystery surrounding the composer s story as the centre of its plot. Jewels of Paradise will be released simultaneously with Cecilia Bartoli s album in English (UK and USA), German, French, Dutch, Spanish and Catalan.

Among the distinguished names appearing on Mission is star French counter-tenor Philippe Jaroussky who features in a first-time collaboration with Cecilia on a selection of duets, alongside the Coro della Radiotelevisione Svizzera, the period orchestra I Barocchisti from Lugano, Switzerland, and conductor Diego Fasolis.

A cinematographic vision of the album directed by Olivier Simonnet and filmed in the historic Galerie des Glaces (Hall of Mirrors) and in the gardens of the Chateau de Versailles will be available on DVD and for TV broadcast later in the year.

Reincarnations - A Century of American C...

Glory to the Holy One: Sacred Music for ...