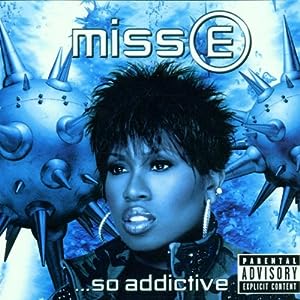 $39.99
As of 2022-11-22 21:01:47 UTC (more info)
Not Available - stock arriving soon
Buy Now from Amazon
Product prices and availability are accurate as of 2022-11-22 21:01:47 UTC and are subject to change. Any price and availability information displayed on http://www.amazon.com/ at the time of purchase will apply to the purchase of this product.
See All Product Reviews

Missy "Misdeameanor" Elliott's first two groundbreaking albums, the double platinum debut Supa Dupa Fly and platinum follow-up Da Real World made her one of the most influential icons of Pop and Hip Hop culture. Her new album, Miss E...So Addictive, is one of the most anticipated albums of 2001, and will undeniably make her an even bigger multimedia superstar than this producer, writer and businesswoman already is. The album features appearances by, among others, Jay-Z, Method Man, Eve, Busta Rhymes, and Ludacris, and was produced by Missy and Timbaland.

After a long winter of discontent, So Addictive finds Missy Elliott hoping to initiate hip-hop's summer of love. Miss E's third album is dosed with feel-good flavor and has more guests than the VIP section of the hippest hip-hop hot spot. Buddies Method Man and Redman bark across the bridge of "Dog in Heat"'s canine funk. Jay-Z and Ludacris feature on two different versions of "One Minute Man"'s scathing soul. Synths tweak and creak in rhythm as Missy unleashes a dreamy diss of those hopeless suitors who unload their cargo before they've sparked her ignition. "Take Away" features Pony man Ginuwine on a hypnotic slow-burner heavily reminiscent of Art of Noise's "Moments in Love." When left to her own devices, as she is on "Lick Shots" (which jangles like Django Reinhardt on downers), Missy comes on like Schooly D, a fearless, female gangsta licking shots against anyone who dares cross her. On "Scream a.k.a. Itchin'" she breaks into a soprano. A 4/4 stomp is stamped indelibly across the ecstasy-holler song "4 My People" (featuring Eve). Overall, it feels as if producer Timbaland has muted his experimental leanings on this outing with his favorite muse in favor of submersible club tracks. Musically, the bhangra beat bop of "Get Ur Freak On" is the standout. The spiral timing of "Whatcha Gon' Do," the fret-skipping "Slap! Slap Slap!" (featuring Da Brat), and the sunken, drunken funk of the not-so-subtle X-hex "X-Tasy" are tied at a close second. --Chris Campion