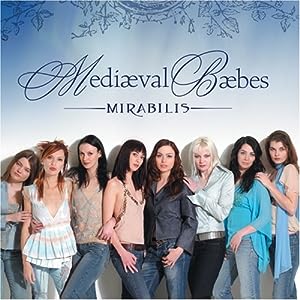 $9.98
As of 2022-01-09 18:43:16 UTC (more info)
Not Available - stock arriving soon
Buy Now from Amazon
Product prices and availability are accurate as of 2022-01-09 18:43:16 UTC and are subject to change. Any price and availability information displayed on http://www.amazon.com/ at the time of purchase will apply to the purchase of this product.
See All Product Reviews

The Mediaeval Baebes are eight young women who share a passion for music several centuries old but are as 21st century as they come. Mirabilis is the latest studio album from the eight chart-topping singers and instrumentalists. The title is a mediaeval Latin word with pagan associations used to describe the forces on the edge of the world and with its mix of gothic, pagan, religious and historical connotations, it brilliantly sums up the Baebes' eclectic approach. The Baebes sing in several languages on the album, including Middle English, Manx, Cornish, Latin, mediaeval Italian and sixteenth-century Swedish. Mirabilis features rich, luxurious textures and evocative sounds--as well, of course, as the baebes trademark seductive vocals. Nettwerk. 2005.

On Mirabilis, the Mediaeval Baebes drill even deeper (and wider) into their chorale sound, making music with ancient roots and timeless designs. An octet of Englishwomen with a penchant for dressing up in flouncy gothic gowns just this side of Victoria's Secret, they've released several albums mining medieval hymns and plainsong. They're still at it here, matching obscure Latin, Gaelic, and old English texts (along with the odd Robert Burns poem) to music that is often newly composed but sounds as if it came out of a Dark Ages court or monastery. But without ever playing instruments more modern than the violin, they bring a modern arranger's head to tunes that float on percussion, recorder, concertina, cittern, hurdy-gurdy, and strings. Under the musical direction of founder Katherine Blake, the harmonies are richer and more complex than on previous Baebes discs. Emily Ovenden's "Temptasyon" flies with soaring three-part harmony and lush accompaniment of strings, both modern and ancient. The Baebes get a little arty on a horror-house reading of "Tam Lin," and they perhaps had to cover "Scarborough Fayre" at some point. But they more than make up for it with the serene "Star of the Sea." This is one time you won't mind having someone get Mediaeval on you. --John Diliberto