Midnight In The Garden Of Good And Evil: Music From And Inspired By The Motion Picture 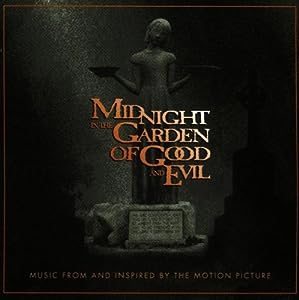 Midnight In The Garden Of Good And Evil: Music From And Inspired By The Motion Picture

$17.50
As of 2022-01-21 02:30:27 UTC (more info)
Not Available - stock arriving soon
Buy Now from Amazon
Product prices and availability are accurate as of 2022-01-21 02:30:27 UTC and are subject to change. Any price and availability information displayed on http://www.amazon.com/ at the time of purchase will apply to the purchase of this product.
See All Product Reviews

Clint Eastwood's latest film project is the big-screen adaptation of the blockbuster non-fiction bestseller Midnight In The Garden Of Good And Evil. Its musical counterpart is this soundtrack album. A virtual Johnny Mercer songbook, it features stunning new versions of classic songs (plus two vintage oldies), underlining the role that Mercer's music plays in the film's story.

This Clint Eastwood vanity-project was one of the biggest box office disappointments of 1997, despite a masterful performance by Kevin Spacey, Eastwood's typically subtle direction and, to these ears anyway, one of the most satisfying collections of songs gathered in service of a film in many a year. It didn't hurt that they were all penned by the late, great Johnny Mercer (a native of Savannah, GA, the film's locale and most crucial, underrated element) and with the exception of Tony Bennett's "I Wanna Be Around" and Sinatra's classic "Summer Wind," were rendered by an all-star team of jazz players (Charlie Haden, Michael Brecker, Joshua Redman, Kevin Eubanks, Christian McBride among them) and an impressive line-up of vocalists including k.d. lang, Paula Cole, Joe Williams, Rosemary Clooney, Cassandra Wilson, Alison Krauss, Diana Krall, and Kevin Mahogany. Eastwood has long been a jazz devotee and, in recent years, eager proselytizer; this album plays like a love letter to one of his most beloved musicians and composers. --Jerry McCulley

only $6.78
Not Available
View Add to Cart