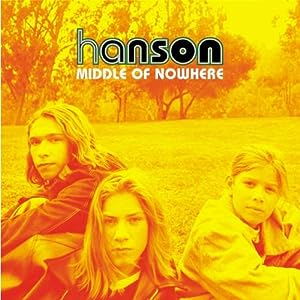 $6.99
As of 2022-12-08 18:49:51 UTC (more info)
Not Available - stock arriving soon
Buy Now from Amazon
Product prices and availability are accurate as of 2022-12-08 18:49:51 UTC and are subject to change. Any price and availability information displayed on http://www.amazon.com/ at the time of purchase will apply to the purchase of this product.
See All Product Reviews

After buying into Bush and Alanis Morissette, Hanson is just what we deserve--Silverchair by way of the Partridge Family, the first pretty-boy fake alt rock group that doesn't pretend to be anything but. If only for truth in advertising, Hanson deserves our admiration. But as it happens, Middle of Nowhere, the debut album from Tulsa brothers Isaac, Taylor, and Zachary Hanson, warrants attention for other reasons as well. At their best, as on "MMMBop" or "Thinking of You," Hanson makes perfect '90s bubblegum, Jackson Five vocal interplay offset by slick power pop guitars and sharp hip-hop production care of the Dust Brothers. Even the more questionable material, such as the cheesy ballads "Weird" and "I Will Come to You," is--at worst--music for, about, and by kids sixteen and under. Such songs are not only more palatable coming from a 13-year-old than from a post-grad, given the age of the writers, the lyrics are actually pretty darn sharp. Granted, these lads had help with both the songwriting (including veterans Barry Mann and Cynthia Weil on the weakest track) and instrumentation (a full cast of session men) on Middle of Nowhere. Still, as young writers and musicians with an indisputably authentic three-part harmony, Hanson is as real a band as it needs to be. Real enough, at least, to be a perfect antidote to MTV's other poster boys, Marilyn Manson. --Roni Sarig