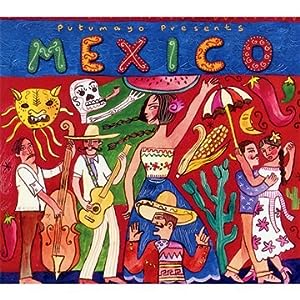 $34.99
As of 2022-09-27 15:31:26 UTC (more info)
Not Available - stock arriving soon
Buy Now from Amazon
Product prices and availability are accurate as of 2022-09-27 15:31:26 UTC and are subject to change. Any price and availability information displayed on http://www.amazon.com/ at the time of purchase will apply to the purchase of this product.
See All Product Reviews

Even in the northern states, Mexican music is easy to find on American radio, but airplay almost exclusively consists of the Tex-Mex norteño style. In contrast, there's barely an accordion in earshot on this sparkling collection of traditionally rooted songs. Los Bravos del Norte de Ramon Ayala weigh in with the bouncy ranchera "Andan Dicendo," but on all other fronts guitar trills rather than squeezebox sighs propel the music. With violin swoops and falsetto vocals, La Calaca unleash the galloping son huasteco/ranchera "Rogaciano." The same ensemble graces the gusto "El Tecolote" with less ferocity but equivalent momentum. Los Lobos dip way into their past with a 1977 version of the son jarocho sped up into a self-proclaimed son loco on "Flor de Huevo," complete with dizzying fretwork and a flailing rhythm. The delicate instrumental son istemeno wedding song "Mediu Xhiga" from Dueto de los Hermanos Rios brings exquisitely ornamented requinto guitar from Mexico's Pacific Coast. Rounding out the set is a slice of Latin cabaret complete with braying clarinets and a gritty vocal takeoff on, of all things, a traditional Mexican Christmas carol via Lhasa de Sela's "Los Peces." --Bob Tarte