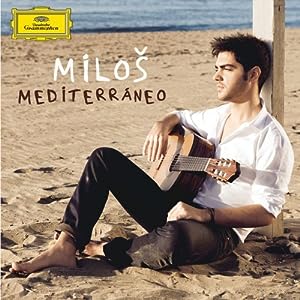 $12.14
As of 2022-06-29 02:49:22 UTC (more info)
Not Available - stock arriving soon
Buy Now from Amazon
Product prices and availability are accurate as of 2022-06-29 02:49:22 UTC and are subject to change. Any price and availability information displayed on http://www.amazon.com/ at the time of purchase will apply to the purchase of this product.
See All Product Reviews

"The music on this recording reflects my character. It tells the listener who I am," says 28-year-old guitarist Milos Karadaglić. As one would expect of a citizen of tiny, turbulent Montenegro, whose career was set in motion by an audacious decision to come to London, that character is marked by a rare single-mindedness. Milos's love affair with the guitar began when he was eight and his father played him a recording of Segovia making magic with Albeniz's Asturias. Armed with the family's dusty old guitar (missing some strings), Milos was enrolled at a specialist music school, where in six months he learned all its teachers had to impart. Such quick progress prompted the school to put him in a different class, one that used the rigorous Fernando Sor method. At nine he gave his first public performance and at eleven entered (and won) his first national competition and, on the same day, also won a singing competition. Subsequently, Milos became a star performer on television and radio, took guitar master classes in Belgrade and then, at the age of 16, followed his childhood dream and decided to audition for a place at the Royal Academy of Music in London.

The timing was poignant - NATO's bombing of his region had just come to an end. When he phoned the Academy he was told that applications for the following academic year were closing. "So while my parents were at work, I found myself filming my favorite pieces, one at a time, five days in a row, in our living room." He was accepted on a scholarship. "Everyone back home was so supportive and proud of my success, and when I finally arrived in London, I was terribly homesick. But, at the same time, I was suddenly surrounded by superb teachers in a fabulous institution - at last exposed to the world. It very quickly felt as if someone had given me wings and I could fly."

Though Milos in his teens had made John Williams his exemplar, in his early 20s Julian Bream became his main influence. "His sound and technique were very different from mine, but listening to his recordings was inspirational on every level. He was an amazing musician... When I later received the Julian Bream Prize from his own hands, it was such an honor." Milos's artistry is reflected in his attitude toward public appearances: "When I'm performing, it's close to dreaming for me - afterwards I don't remember much about it. I just remember feeling very well, with a high level of energy and emotion. Each day I try to find new colors and timbres." The colors and timbres to be found in this album have been dictated by his desire to reflect the rich musical ambiance he was born into, with influences from both the eastern and western ends of the Mediterranean. "Montenegro itself," he says, "is at a cultural crossroads, which is why the music I grew up with is so interesting and diverse."

Albeniz's Asturias earns its place because of Segovia and "because, no matter how young or old I have been, it has always been a challenge - it allows me to express my character to the extreme. Sevilla is so incredibly exciting that it always makes me want to dance. But, whenever I play his Granada, right from the first phrase it feels like I am falling in love. It reminds me of the heat and salt of the Mediterranean."

Many of the pieces here were originally written for piano, yet they sound entirely natural on the guitar. Granados's Andaluza had previously been arranged for the instrument, but Milos and his mentor Michael Lewin of London's Royal Academy have made their own version of it, as well as this composer's Orientale. As Milos explains, "It's challenging because while the accompaniment is smoothly arpeggiated in the bass, the melody in thirds comes in on top. Putting it on to one guitar was very exciting."

Karadaglić doesn't have much personal connection with Greece, "but when I heard Mikis Theodorakis's A Day in May I started to cry. It talks about political upheaval and loss of a loved one. A few years ago my uncle lost his only son and I wanted to dedicate this piece to him. Performing this song always makes me feel very emotional. It reflects a time of hardship, and that too is a big part of who I am."

The work which reflects the biggest part of Milos's story is the Italian guitarist-composer Carlo Domeniconi's 1985 suite Koyunbaba: "I heard it for the first time when I had just arrived in London. With its Turkish folksong theme, and magical soundworld, it brought back all those memories and places I had left behind. Whenever I play it, it is different, like the sea itself, sometimes calm, sometimes a storm..."

Since Francisco Tárrega was the father of the modern Spanish guitar, pieces by him were de rigueur. "They tell us so much about this amazing box with six strings," he smiles, adding, "From the famous Recuerdos de la Alhambra to Lágrima and Capricho árabe, all the works on the album are so pure and magical. At the same time they speak equally to the most educated classical musician and the man on the street. This is the beauty and true essence of the classical guitar."

only $1.90
Not Available
View Add to Cart