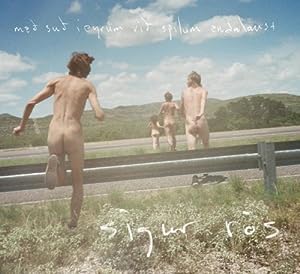 $10.93
As of 2021-04-18 15:38:50 UTC (more info)
Not Available - stock arriving soon
Buy Now from Amazon
Product prices and availability are accurate as of 2021-04-18 15:38:50 UTC and are subject to change. Any price and availability information displayed on http://www.amazon.com/ at the time of purchase will apply to the purchase of this product.
See All Product Reviews

Inspired by the unfettered feeling of the acoustic performances filmed during Heima, Sigur Rós
adopted a looser approach in creating their fifth album Med Sud I Eyrum Vid Spilum Endalaust.
The album consequently is fresher and more human than anything they ve previously
recorded.
Rough edges, cracked notes, and the sound of fingers on strings are audible resulting in tracks
(e.g. Íllgresi ) that prove to be the band's sparsest and most affecting work to date. Worry not
though, plenty of electric guitar can be heard throughout the album ensuring Sigur Rós
commitment to challenging sonic limitations.
Med Sud I Eyrum Vid Spilum Endalaust is truly a groundbreaking album for Sigur Rós. It s the
first time they ve attempted to write, record, mix, release and support (by touring) an album in
the same year. Notoriously known for their laborious writing/recording style and their Icelandic
roots, Sigur Rós decided to record an album outside of Iceland for the first time. Recording,
mixing and mastering sessions took place in such un-Reykjavik cities as New York (Sear
Sound and Sterling Sound), London (Abbey Road and Assault & Battery) and Havana. The
result is pretty much their leave home album, the anti-Heima.
The opening track, Gobbledigook , is a manifesto setter with its shifting/no time signature. On
the last track, All Alright , Sigur Rós find themselves singing a song solely in English for the
first time. The seventh track, Ára Bátur , was performed with a full orchestra and the London
Oratory Boys Choir. This was recorded in one take with no overdubs and the result was 90
people playing at once and just one perfect take. This is their first album working with Flood
(U2, Depeche Mode, PJ Harvey) and the first since their debut to not be recorded with Ken
Thomas. It was a true co-production, one that found Sigur Rós breaking out of old
molds/habits.
The cover artwork is a photo taken from a flyer for Ryan McGinley s most recent photo
exhibition in NYC, I Know Where the Summer Goes , and the image captures perfectly the
spirit of the album, one of free-spirited happiness and exploration.
The band will be touring the US throughout the fall of 2008 to support Med Sud I Eyrum Vid
Spilum Endalaust.

Sigur Rós--the sound of snow-capped peaks. Or winged things flocking over vast plains. Or salmon making that final courageous, muscular leap upstream, homeward bound. Ever since the BBC so aptly enlisted the help of the band’s "Hoppipolla" single to theme the groundbreaking natural history series Planet Earth, the ever-ethereal Icelandic band have become somewhat typecast, finding themselves conducting awe across the backdrops of nearly every other programme in that broad genre. And with that came the danger that all which followed would automatically become an instant cliché. And though their last album Takk saw a slowing of their evolution in favour of solidifying the established sound in accessible earfuls, Med Sud I Eyrum Vid Spilum Endalaust (which translates as "with a buzz in our ears we play endlessly") sees enough of a stylistic twist to keep things moving, without undercutting this new approachability. Where previously they sounded untouched by human hands, all alien post-rock abstractions, they now sound much more organic, sometimes literally like men playing instruments in a room. Albeit pensively, and extraordinarily. It is a perky record, attentive and exquisite, familiar but not derivative. The rhythmically adventurous "Gobbledigook" reminds of Brooklyn experimentalists Battles, unplugged, the xylophone heavy "Inní Mér Syngur Vitleysingur" is this album’s "Hoppipolla" and "Ara Batur" is trembling, lonely and eventually triumphant. "Festival", the album’s centrepiece, melds the old and new Sigur Rós dramatically over nine majestic minutes and must number amongst the best moments of their career. -- James Berry