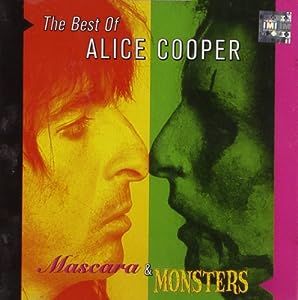 $13.98
As of 2022-08-07 22:08:42 UTC (more info)
Not Available - stock arriving soon
Buy Now from Amazon
Product prices and availability are accurate as of 2022-08-07 22:08:42 UTC and are subject to change. Any price and availability information displayed on http://www.amazon.com/ at the time of purchase will apply to the purchase of this product.
See All Product Reviews

For those not wanting to plunk down $60 for last year's boxed set, here's an expanded version of the 1974 anthology Alice Cooper's Greatest Hits -22 tracks on one CD! Includes School's Out; Poison; You and Me; How You Gonna See Me Now; Only Women; No More Mr. Nice Guy; I Never Cry; Body; Elected; Eighteen , and more of Ol' Black Eyes' 1971-1990 best!

An essential figure in any history of the American grotesque, son-of-a-preacher-man Vincent Furnier served as a missing link between Screamin' Jay Hawkins and Marilyn Manson. As Alice Cooper, he helped make the pop world safe for morbidity and makeup, scoring a bunch of hits and misses along the way. Mascara & Monsters serves up a fairly rote chronology of Cooper's '70s singles, with the occasional B-side and 1989's "Poison" (cowritten by mainstream hitmeister Desmond Child!) thrown in for good measure. As such, the album doesn't live up to its best-of billing. "Dead Babies," arguably the best track on Killer, loses out to "Under My Wheels," while the garage-rock glories of the band's first two albums are also conspicuously absent. On the plus side, "School's Out," "Elected," and "No More Mr. Nice Guy" still sound great. If you're looking for easy access to those and numerous lesser singles, this collection will do the trick. --Bill Forman

The Best of Simon & Garfunkel from S...