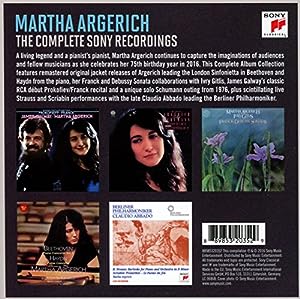 $79.02
As of 2020-09-24 03:52:24 UTC (more info)
Not Available - stock arriving soon
Buy Now from Amazon
Product prices and availability are accurate as of 2020-09-24 03:52:24 UTC and are subject to change. Any price and availability information displayed on http://www.amazon.com/ at the time of purchase will apply to the purchase of this product.
See All Product Reviews

Argentinian pianist Martha Argerich is widely regarded as one of the greatest pianists of the second half of the twentieth century. In celebration of her 75th birthday, Sony Classical is pleased to release Martha Argerich The Complete Sony Classical Recordings, a new 5-CD original jackets collection featuring two albums available for the first time on CD remastered from the original analogue tapes. Argerich rose to international prominence when she won the seventh International Chopin Competition in Warsaw in 1965 at age 24. In that same year, she debuted in the U.S. in Lincoln Center s Great Performers Series.

Since the 1980s, Argerich has staged few solo performances, concentrating instead on concertos and, in particular, chamber music and collaborating with instrumentalists in sonatas. She is noted especially for her recordings of 20th-century works by composers such as Rachmaninoff, Messiaen and Prokofiev. Her aversion to the press and publicity has resulted in her remaining out of the limelight for most of her career. Nevertheless, she is widely recognized as one of the greatest pianists of her time.

only $5.07
Not Available
View Add to Cart