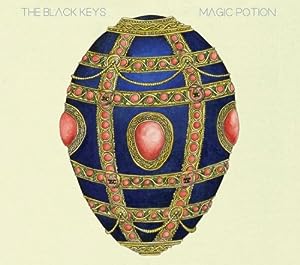 $6.69
As of 2022-08-04 06:12:57 UTC (more info)
Not Available - stock arriving soon
Buy Now from Amazon
Product prices and availability are accurate as of 2022-08-04 06:12:57 UTC and are subject to change. Any price and availability information displayed on http://www.amazon.com/ at the time of purchase will apply to the purchase of this product.
See All Product Reviews

Magic Potion, the Black Keys' fourth album, is a spectacularly stripped-down set of sneakily melodic blues-besotted rock concocted in the Akron, Ohio basement studio of drummer Patrick Carney. Guitarist-singer Dan Auerbach is possessed of a compelling, hurt-beyond-his-years voice and an approach to lead guitar that is both wildly expressive and utterly succinct. The self-taught Carney, who anchors these tracks, may force writers to return "heavy" to the rock-critic lexicon as a seriously praiseworthy term. The Black Keys maintain a punk terseness to their adamantly do-it-yourself sound; they're as single-minded in their idiosyncratic evocation of the electric Mississippi blues as artists like the late Junior Kimbrough and R. L. Burnside as the Ramones were about early sixties rock and roll. However, there is nothing high-concept or ironically distanced about their style; it's all sweat, sincerity and as much swagger as Carney's basement allows.

All hail the riff king! The Black Keys' guitarist/singer Dan Auerbach has the meanest way with a hook since Jimmy Page. He adds to his arsenal on the band's fourth full-length release, on which each track pounds its way into your skull with fuzzy, swampy fury. Less is very definitely more in Auerbach and drummer Patrick Carney's world as the stripped-down guitar/drums attack smolders, burns, and then ignites without shifting into heavy-metal overdrive. But even with the occasional ballad such as "You're the One" slowing the momentum, this is an intoxicating blast of raw, thudding blues power. The duo impressively control the dynamics, raising and lowering the tension in a yin-yang struggle of ominous, greasy, heavy blues-rock that never sounds forced. With the exception of a few subtle but effective overdubs, this is the sound Auerbach and Carney heard in the drummer's basement studio where the music was recorded. Like the best rock and roll, the disc exudes a dark, cramped claustrophobia and foreboding sense of danger, just like wandering through a haunted house, unaware of what is behind the next corner. It's the main ingredient in the band's deceptively simple yet potent formula that creates this addictive, compelling, and often intense album. --Hal Horowitz

We Were Dead Before the Ship Even Sank [...