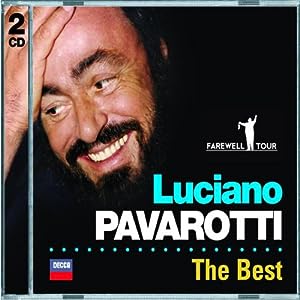 $13.49
Not Available - stock arriving soon
Buy Now from Amazon
Product prices and availability are accurate as of and are subject to change. Any price and availability information displayed on at the time of purchase will apply to the purchase of this product.
See All Product Reviews

Luciano Pavarotti, the best-selling classical artist of all-time, recently celebrated his 40th anniversary as a recording artist and has just begun his 40-date worldwide farewell tour that will kick off in the US. Luciano Pavarotti-The Best, is a 2-CD set highlighting 40-years of recordings and includes bonus tracks from his 1964 Decca debut. 2005.

Anyone discovering this album who had never heard or heard of Luciano Pavarotti would immediately recognize greatness, a one-of-a-kind, one-per-generation (maybe) talent and personality that commands attention, respect, and yes, even love. These 35 selections are an astonishing achievement: Taken, for the most part from the tenor's prime--the 1970s and '80s (although there are four earlier and three from 2003)--what we hear is golden tone, impeccable diction, an innate sense of style and line and where the music should be going, absolutely natural phrasing, an evenness of production from C to (shining) C, and an ability to communicate warmth, passion, and the sheer love of music-making. The first CD is devoted to opera, with a dazzling "La donna e mobile," a smooth-as-silk "Una furtive lagrima," the famous aria from "La fille du regiment" with nine high Cs, "Nessun dorma" and many more. The second CD is mostly songs ("Torna a Surriento," "La danza," "O sole mio," etc.) sung with élan and flawless style, plus a couple of ghastly pop tunes (from 2003); to make up for them, we get a bonus--the three arias from Pavarotti's first EP from Decca, recorded in 1964--"E lucevan le stelle" and two arias from Rigoletto. Bravo, Pavarotti--we miss you already. --Robert Levine