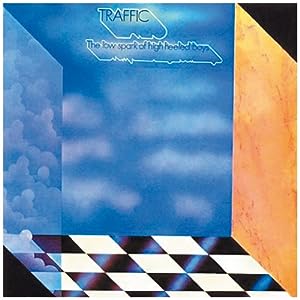 $5.83
As of 2023-01-22 11:49:42 UTC (more info)
Not Available - stock arriving soon
Buy Now from Amazon
Product prices and availability are accurate as of 2023-01-22 11:49:42 UTC and are subject to change. Any price and availability information displayed on http://www.amazon.com/ at the time of purchase will apply to the purchase of this product.
See All Product Reviews

Steve Winwood and the band delivered a stellar set of songs on this 1971 LP, from the funky hit Rock & Roll Stew-Pt. 1 to the Capaldi-penned Light Up or Leave Me Alone to the sprawling title gem.

Despite not even charting in the band's native England, this album became a platinum-selling American hit on the basis of three enduring FM radio staples--the expansive, jazzy impressionism of the near-12 minute title track, and the more straightforward funk of the R&B charmers "Light Up or Leave Me Alone" and "Rock & Roll Stew." Those disparate tracks perfectly underscore Traffic's rich musical appeal and its restless, sometimes problematic creative and interpersonal relationships. With now thrice-departed Dave Mason out of the mix and percussionists Jim Gordon and Reebop Kwaku Baah participating in the studio for the first time, the band's innate musicality truly takes wing. Winwood's familiar vocal phrasings nearly take a backseat to his fluid, dramatic guitar work on "Rock & Roll Stew Roll" and "Many a Mile to Freedom," while the Tull-ish, folk-madrigal sensibilities of "Hidden Treasure" and "Rainmaker" are further punctuated by Chris Wood's deft flute and woodwind flourishes. Compared with the more organic John Barleycorn album, the contrast is all the more remarkable. While many contemporary bands were experimenting with various attempts at fusion, few achieved this collection's rock-jazz-folk-R&B range or level of often subtle sophistication. Digitally remastered, this edition also contains the six-minute-plus U.S. single version of "Rock & Roll Stew, Parts 1 & 2" as a bonus track. --Jerry McCulley

A Day at the Races [Vinyl]

only $9.39
Not Available
View Add to Cart

The Best Of Survivor

only $6.34
Not Available
View Add to Cart