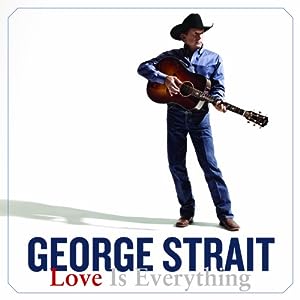 $9.95
As of 2021-09-22 03:25:40 UTC (more info)
Not Available - stock arriving soon
Buy Now from Amazon
Product prices and availability are accurate as of 2021-09-22 03:25:40 UTC and are subject to change. Any price and availability information displayed on http://www.amazon.com/ at the time of purchase will apply to the purchase of this product.
See All Product Reviews

George Strait is set to release his highly anticipated 40th studio album, Love Is Everything, coming May 14 on longtime label home MCA Nashville. The King of Country music rejoined veteran producer Tony Brown to co-produce the album, which features 13 new tracks, including the current single Give It All We Got Tonight;. Love Is Everything includes four songs written or co-written by Strait, who penned many alongside his son Bubba Strait and legendary songwriter Dean Dillon.

With the new album's first single Give It All We Got Tonight climbing the Country radio charts, the song is poised to become Strait's 60th #1 single. Fans and fellow Country artists recently started campaigning for the Sixty For Sixty movement, which encourages local radio stations to make the song his 60th #1 single before his 61st birthday on May 18.

The Road Goes on Forever

About To Get Real