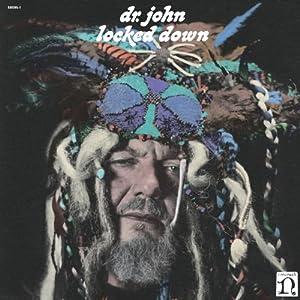 $12.99
As of 2021-09-23 05:56:56 UTC (more info)
Not Available - stock arriving soon
Buy Now from Amazon
Product prices and availability are accurate as of 2021-09-23 05:56:56 UTC and are subject to change. Any price and availability information displayed on http://www.amazon.com/ at the time of purchase will apply to the purchase of this product.
See All Product Reviews

New Orleans legend Dr. John's Nonesuch debut, produced by Black Keys guitarist and uber-fan Dan Auerbach, distills half a century of this Rock and Roll Hall of Fame inductee's picaresque musical history, melding his shamanistic stage persona with the authority of a consummate studio musician, the cosmic conjurer with the street-savvy poet. The ten new songs on Locked Down, written by Dr. John with Auerbach and a handpicked crew of backing musicians, combine incantatory chants ("Ellegua") and often politically charged raps ("Revolution") with candid and soulful reflections ("My Children, My Angels"), swaggering R&B ("Big Shot"), and a healthy dose of hypnotic, simmering funk ("The King Of Izness"). As with much of what this multiple Grammy-award winning singer and composer has recorded over the last five decades, the Big Easy is the musical and spiritual jumping-off point, but these new tracks incorporate a world's worth of influences, from gospel and blues to psychedelic rock and Afro-beat.

Auerbach had reached out to the iconic pianist, composer and singer—better known to friends and fans as Mac Rebennack—in 2010, offering to produce "the best record you've made in a long time." After performing with Rebennack at the 2011 Bonnaroo Music Festival, Auerbach made good on that promise. The instrumental tracks for Locked Down were recorded at Auerbach's new Easy Eye Sound in Nashville and took shape during nine days of intense free-form sessions with the band Auerbach had originally assembled for Bonnaroo. Rebennack later returned on his own, with pages of lyrics, poems and ideas, to complete these songs. As Auerbach recounts, "Watching him come up with parts was just so awesome. Mac is fearless, Like that Farfisa solo on ‘Revolution' -- that's a first-take solo. He just goes for it, man. And he killed it." Though Rebennack is sought after by countless jazz, R&B and rock artists for his piano playing, Auerbach kept him away from the instrument while encouraging him to experiment with other keyboards. "I wanted to keep him a bit more edgy. I didn't want him to be outright retro in any way. And keeping him off the piano sort of helped. A lot of the music I played for Mac, when I went and visited him before the sessions, really perked up his ears - the really oddball stuff like the Ethiopian funk where the keyboardist is playing a Farfisa, those kind of good weird keyboard sounds."

With Auerbach's help, Rebennack—recently featured on HBO's Treme, playing himself—is poised to reclaim his position as master of the melting-pot Louisianan music style he pioneered in the late sixties under the guise of Dr. John, the Night Tripper. Funky, mysterious, downright mystical albums like Gris Gris and Babylon deeply influenced such artists as Eric Clapton and the Rolling Stones, who invited Rebennack to play on their infamous Exile On Main Street sessions, and this work has, arguably, altered the course of rock and roll. Auerbach's mission was "to bring back an awareness of him. I don't think he gets enough of the credit he deserves. After meeting him and talking to him and seeing the kind of stuff he was into, I knew that was still there, that person, that fire. He really was spiritual and cosmic but very much into conspiracy theory, politics. He had all the right things in his mind and I just knew I could get him to speak that language again."

Dr. John will celebrate the release of Locked Down and his remarkable legacy with a three-weekend residency in April at the Brooklyn Academy of Music.

Why I Sing The Blues