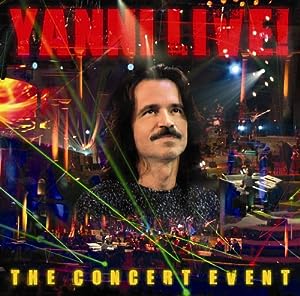 $3.89
As of 2023-02-02 01:19:53 UTC (more info)
Not Available - stock arriving soon
Buy Now from Amazon
Product prices and availability are accurate as of 2023-02-02 01:19:53 UTC and are subject to change. Any price and availability information displayed on http://www.amazon.com/ at the time of purchase will apply to the purchase of this product.
See All Product Reviews

This is Yanni's first live recording in over 8 years. His last live release, Tribute, has scanned over 1.3 million copies to date. The "Tribute" album attained platinum status in the U.S. within five weeks of its November 4, 1997 release and is currently approaching double Platinum status.

Who can fault an artist who so clearly embraces a one-planet, one-people worldview? Someone who recruits guest instrumentalists from every hemisphere to underscore his fondness for multiculturalism and convey his wish for global harmony? You can't help but admire Yanni, the Greek keyboardist/composer, even while acknowledging such nobility does not always translate into deeply satisfying music. On this, the audio-only component of his third made-for-television concert production (filmed in 2005 in Las Vegas), Yanni continues in his adopted role of True Egalitarian, playing a few bars to open a piece, then fading into the background to let other musicians (on violin, trumpet, sax, didgeridoo, hammer dulcimer, even keyboards) command the music's flow. A lovely gesture, but one that often results in extended soloing that sidetracks, even derails, the focus of the music. (Consider "Playtime," where Ming Freeman plays the jazzy piano solo, and the disc's previously unreleased track, "The Storm," pairing violinists Samvel Yervinyan and Sayaka Katsuki in a showy duet that is reminiscent of something from Bond.) Thus while the musicianship is first-rate, the production is superb, and some tracks are terrific (too bad "Standing in Motion" fades out so quickly), this disc is more about the jamming and less about staying on compositional task. Likely this project will be better appreciated in its DVD version, where the staging and artist interaction is on display. Meanwhile, some longtime fans may be left yearning for a day when Yanni will step up to his keyboards, drop the hammer, and let his own muse rock. --Terry Wood

On the Other Ocean