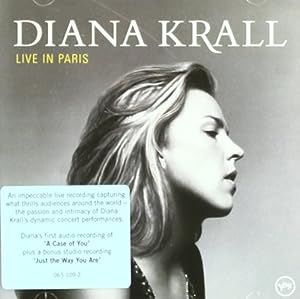 $7.00
As of 2021-04-11 03:20:27 UTC (more info)
Not Available - stock arriving soon
Buy Now from Amazon
Product prices and availability are accurate as of 2021-04-11 03:20:27 UTC and are subject to change. Any price and availability information displayed on http://www.amazon.com/ at the time of purchase will apply to the purchase of this product.
See All Product Reviews

Recorded at the historic Olympia Theatre in Paris in November 2001, this is Diana Krall's first live album. Backed by her quicksilver combo of bassist John Clayton, drummer Jeff Hamilton, and guitarist John Pisano (on some tracks), Krall's jazz heritage comes through loud and clear on this program of standards, ballads, and bossa novas. On Peggy Lee's "I Love Being Here with You," Bob Dorough's "Devil May Care," and Frank Sinatra's "Fly Me to the Moon," Krall's snappy, postbop piano playing shows off her debt to Nat "King" Cole and Jimmy Rowles. Her cool contralto vocals are illuminated by the Orchestre Symphonique Europeen, under the direction of Alan Broadbent, as well as the London Symphony Orchestra, led by conductor Claus Ogerman. Krall's deep take on Joni Mitchell's "A Case of You" is a great choice for an encore, and the CD concludes with Billy Joel's "Just the Way You Are" (a studio track from a film called The Guru), with tenor saxophonist Michael Brecker and bassist Christian McBride. This collection only hints at what Diana Krall has to offer in the future.--Eugene Holley Jr.

I'll Be Home For Christmas

The Best of the Song Books