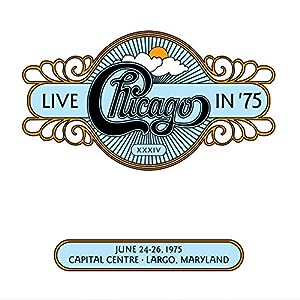 $10.10
As of 2022-12-05 05:42:21 UTC (more info)
Not Available - stock arriving soon
Buy Now from Amazon
Product prices and availability are accurate as of 2022-12-05 05:42:21 UTC and are subject to change. Any price and availability information displayed on http://www.amazon.com/ at the time of purchase will apply to the purchase of this product.
See All Product Reviews

2-CD Rhino Handmade release now available for retail for the first time.
After releasing its eighth consecutive gold album in just six years, Chicago embarked upon a massive stadium tour in 1975 that’s considered to be one of its finest. The shows found the group at the pinnacle of its prowess, combining the jaw-dropping musicality and contagious onstage energy that made Chicago one of the most successful acts in American pop history. This two-disc set contains two hours of previously unreleased performances recorded June 24-26 at the Capital Centre in Largo, Maryland. The collection is presented in a hardbound slipcase accompanied by a foldout poster that features rare photos from the tour.