Live: Hope At The Hideout 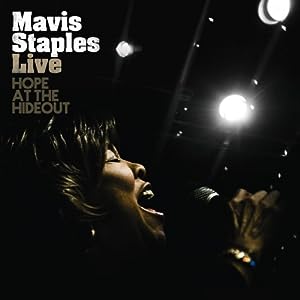 Live: Hope At The Hideout

$10.41
As of 2022-09-16 20:29:08 UTC (more info)
Not Available - stock arriving soon
Buy Now from Amazon
Product prices and availability are accurate as of 2022-09-16 20:29:08 UTC and are subject to change. Any price and availability information displayed on http://www.amazon.com/ at the time of purchase will apply to the purchase of this product.
See All Product Reviews

On June 23, 2008 at Chicago's legendary roots club the Hideout, Staples played with a stripped down, raw, and swampy three-piece band and just a handful of backup singers, providing a rare opportunity for fans to get close to a figure who has led a five-decade long musical charge towards equality. This release comes off her critically lauded WELL NEVER TURN BACK and is a potent mix of her classic civil rights freedom songs alongside some fiery new compositions co-written with producer Ry Cooder.

Chicago is Mavis Staples' hometown so she is in exceptionally fine spirits on this 2008 live set, her first solo concert recording, at the Windy City's Hideout venue. Backed by a stripped down yet phenomenal three piece band of veterans featuring guitarist Rick Holmstrom, drummer Stephen Hodges and bassist Jeff Turmes along with a trio of backing vocalists, Staples comes to "bring joy, happiness, inspiration and some positive vibrations." Mission accomplished on this hour long set that borrows liberally from her 2007 civil rights oriented album We’ll Never Turn Back, but ups the energy and commitment for the live show. Her group burrows into a deep, dark swamp groove led by Holmstrom's shimmering guitar perfect for Staples' husky, gospel voice to pour into. On "This Little Light" she vocally riffs off the repeated lick, bringing intensity to the song only hinted at in its studio version. She digs back into her catalog to revive the traditional "Wade in the Water," here given a slight funk backbeat and brought to shore by Staples' gutsy, churchy reading. She's practically forced into a closing encore of the Staples Singers' signature tune "I'll Take You There," a sing-along for the audience played against skeletal guitar and enough joyous handclaps to raise the club, and now the listener, a little closer to heaven. -- Hal Horowitz

only $3.85
Not Available
View Add to Cart