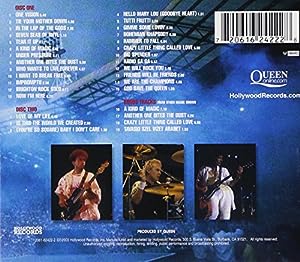 $12.44
As of 2022-09-24 18:25:13 UTC (more info)
Not Available - stock arriving soon
Buy Now from Amazon
Product prices and availability are accurate as of 2022-09-24 18:25:13 UTC and are subject to change. Any price and availability information displayed on http://www.amazon.com/ at the time of purchase will apply to the purchase of this product.
See All Product Reviews

Bigger-than-life and proud of it, Queen's tongue-in-cheek pomposity was ironically one of its most endearing charms. This double-disc live album recorded at the band's typically massive 1986 Wembley Stadium stand in support of its A Kind of Magic album is a perfect distillation of the band's overarching intentions--and virtually every '70s/'80s rock cliché punk rebelled against. The tracks may reverberate with the boominess of the punter's paradise they were recorded in, but it's an ambience that underscores the shows' propulsive, populist intent. Latter day hits like "Under Pressure" and "Another One Bites the Dust" may have their nascent club-beat savvy hammered into conformity with thumping rockers like "We Will Rock You" and "Tie Your Mother Down," but then this is as unapologetic as stadium rock gets. Mercury, May, Deacon, and Taylor are in top form throughout, shrewdly building the show into what, given its relatively late recording date in their career, might as well be an emblematic greatest hits live (especially on its brisk-paced second disc) experience. --Jerry McCulley

The Ties That Bind: The River Collection...