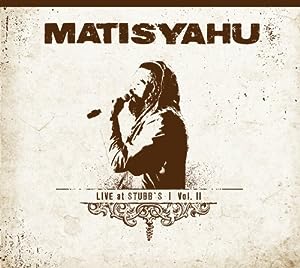 $7.17
As of 2021-07-26 03:23:16 UTC (more info)
Not Available - stock arriving soon
Buy Now from Amazon
Product prices and availability are accurate as of 2021-07-26 03:23:16 UTC and are subject to change. Any price and availability information displayed on http://www.amazon.com/ at the time of purchase will apply to the purchase of this product.
See All Product Reviews

Grammy-nominated artist Matisyahu, whose transcendent live shows are widely celebrated for moving masses around the globe, has once again captured the magic that he creates on stage with his new live DVD. Live at Stubb's Vol. II, set for release on February 1, 2011, is the second installment in his signature Live at Stubb's series.
When Matisyahu's groundbreaking original live album, Live at Stubb's, was released in 2005, it launched him onto Top 40 radio with his now most-recognizable anthem 'King Without A Crown.' He had made an indelible mark on the musical consciousness of the U.S., but this proved to be only the beginning.
Now with three critically acclaimed studio albums to his name, Matisyahu decided to return to where it all began. On a hot August night in Austin, TX, this past summer, Matisyahu took the stage at the famed music venue Stubb's with his band, Brooklyn's The Dub Trio, for an unforgettable live music experience. Showcasing his incredible artistic evolution, Matisyahu unveiled brand new song 'Open The Gates' and performed songs that span his lauded catalogue, including selections from 2004's Shake Off The Dust...Arise, 2005's Live at Stubb's, 2006's Youth and 2009's Light, which debuted inside the Billboard Top 20. Inviting the intimate crowd to join him in documenting the extraordinary energy in the room that evening, he and his audience created the musical time capsule that is now Live at Stubb's Vol. II. These songs are infused with a vibrancy that can only be created during a Matisyahu performance, beautifully displaying the one-of-a kind voice and distinctive sound that has brought him to the forefront of today's music landscape. With a re-discovered love for roots reggae and improvisation at the core of his live show, Matisyahu brilliantly re-vamped the vocal and instrumental arrangements, elevating each song to new heights. From 'Kodesh' to tracks such as 'Mist Rising,' 'Youth,' 'Darkness Into Light' and 'One Day,' Live at Stubb's Vol. II is a raw and inspiring musical journey that is sure to become a treasured part of Matisyahu s acclaimed catalogue. With prolific lyrics, anthemic choruses and his signature fusion of reggae, pop-rock, hip-hop, ska-inflected new wave and acoustic folk, Matisyahu has broken boundaries through his music and has unified millions of fans with his music and message of peace, hope and understanding. Since recording Live at Stubb's on February 19, 2005, Matisyahu has gone on to become one of the most beloved and pioneering artists in music today with Stubb's holding a special meaning for him and his fans.

Dancehall: The Rise of Jamaican Dancehal...

The Trio: Live From Chicago (2 CD)