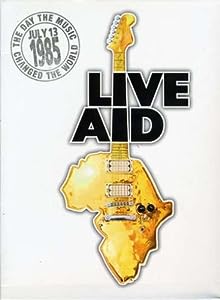 $39.98
As of 2022-09-24 19:16:53 UTC (more info)
Not Available - stock arriving soon
Buy Now from Amazon
Product prices and availability are accurate as of 2022-09-24 19:16:53 UTC and are subject to change. Any price and availability information displayed on http://www.amazon.com/ at the time of purchase will apply to the purchase of this product.
See All Product Reviews

Any music fan can tell you exactly where they were on July 13th, 1985. There had never been a concert event of such magnitude the biggest names in music performing in a concert broadcast live from 2 continents to an audience of over 1.5 billion. It is estimated that 85 percent of the world's television sets were tuned in to Live Aid that day. Now, for the first time on home video, you can own the concert that was arguably the biggest rock event in history featuring David Bowie, Eric Clapton, Madonna, Paul McCartney, Sting, The Who, U2, Neil Young, and many, many more. Over 10 hours of performances in a premium packaged 4 DVD set. Royalties will benefit Band Aid Trust, which continues to provide direct hunger relief in Africa.

Billed as "the day music changed history," the Live Aid concerts of July 13, 1985, were held to raise money to fight the horrifying famines sweeping Africa. The brainchild of Bob Geldof and representing the efforts of countless musicians and technicians, Live Aid was a genuine and inspiring effort to help the victims of an overwhelming calamity. Twenty years after the twin concerts (one in London, one in Philadelphia) were broadcast worldwide, the 4-DVD treatment furthers the cause, with proceeds going toward the Band Aid Trust.

The DVD set opens with a heartbreaking documentary on the crisis, followed by videos of the two hit songs that represented the collaborative nature of Geldof's efforts—Band Aid' s "Do They Know It's Christmas?" and USA for Africa's "We Are the World." Since Live Aid was never intended to be released in a recorded format, preservation of TV footage has been unreliable, resulting in some glaring omissions. Led Zeppelin's semi-reunion doesn't appear, and neither does a legendary session with Bob Dylan, Ron Wood, and Keith Richards. Some sets by performers who were popular at the time may inspire either nostalgic glee or head-scratching (Kiki Dee fans, you know who you are). Sprinkled amid these performances are a couple real gems, including a performance by Run DMC, the event's sole representative of the ascendant rap movement. Much of the music here was a passing fad, but the sentiment that brought it all together is timeless. -- Ryan Boudinot