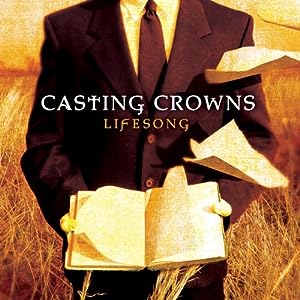 $7.30
As of 2021-07-24 12:19:11 UTC (more info)
Not Available - stock arriving soon
Buy Now from Amazon
Product prices and availability are accurate as of 2021-07-24 12:19:11 UTC and are subject to change. Any price and availability information displayed on http://www.amazon.com/ at the time of purchase will apply to the purchase of this product.
See All Product Reviews

Beach Street Records is proud to release Lifesong, the much anticipated sophomore project from Dove Award-winning, Atlanta-based group, Casting Crowns. This follows the group's hugely successful self-titled debut that has already sold over one million copies, and has scored the band three consecutive number one radio hits, each holding the top spot for multiple weeks. This new album explores what an authentic life of worship looks like, desiring to ask the hard questions of why-are-you-doing-that, instead of just what-are-you-doing. Zomba. 2005.

Much like their brethren Mercy Me, Casting Crowns was thrust into the limelight from a worship band beginning. With steady chops honed from hundreds of shows/services a year and a simple, straight-ahead rock style, the Florida-based band found themselves on top of the charts thanks to the success of massive singles "Who Am I?" and "The Voice of Truth" from its self-titled debut (2003). Lifesong is a sensible sophomore follow-up that shows the band expanding its musical creativity while lyrically remaining true to the cause. Theres a common thread of humility throughout as front man Mark Hall sings of the disenfranchised ("Does Anybody Hear Her"), the heartbroken ("Praise You in This Storm"), and the remorseful ("Prodigal"). Hall even calls outside for songwriting help from the brilliant Nichole Nordeman in "Stained Glass Masquerade," a cautionary warning about church hypocrisy in the face of keeping it real. The radio-friendly, U2- ish "Lifesong" proves a savvy book-end to the penitent closer "And Now My Lifesong Sings." Both evoke strong messages that worship is all about how one lives a life and not what kind of songs they may sing. Lifesong is an impressive effort for a band that knows its strengths and how to play to them. --Michael Lyttle