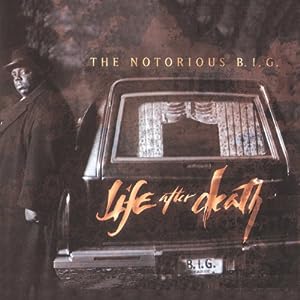 $7.46
As of 2023-02-07 14:13:25 UTC (more info)
Not Available - stock arriving soon
Buy Now from Amazon
Product prices and availability are accurate as of 2023-02-07 14:13:25 UTC and are subject to change. Any price and availability information displayed on http://www.amazon.com/ at the time of purchase will apply to the purchase of this product.
See All Product Reviews

The King of Brooklyn, Biggie Smalls, busted through with an instant hip-hop classic on his first album, Ready to Die, but he outdid even his standard on Life After Death, an audible, posthumous autobiography about the life of the former dope dealer. The 2 CD set revels in death, especially on "Niggaz Bleed," "Somebody's Gotta Die," and "You're Nobody ('Til Somebody Kills You)," but it's painfully clear that this chestnut-cheeked, fun-loving father of two wanted to see his kids grow up on "Sky Is the Limit" and "Miss U," both of which point to the future. The album also serves as a testament to Biggie's flexibility: he adopts Bone Thugs-N-Harmony's rapid rhyme flow and Midwestern beats when they guest on "Notorious Thugs," he positively bounces on both "Mo Money Mo Problems" and "Going Back to Cali" (guesting Eazy Mo Bee), and even kicks it Wu-Tang style when RZA shows up for "Long Kiss Goodnight." --Asondra R. Hunter