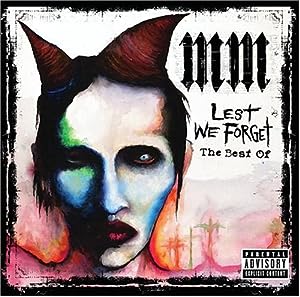 $9.98
As of 2023-01-29 13:52:56 UTC (more info)
Not Available - stock arriving soon
Buy Now from Amazon
Product prices and availability are accurate as of 2023-01-29 13:52:56 UTC and are subject to change. Any price and availability information displayed on http://www.amazon.com/ at the time of purchase will apply to the purchase of this product.
See All Product Reviews

It has taken ten years, boys & girls to climb this ugly hill & these are the Songs of Golgotha. We have put together the best of what we have made & this is only a reminder that you can cut off the head but it only grows back harder. The band is in the studio, still growing & there is no sign of our knuckles healing. -MARILYN MANSON.

Culled from the band’s ten year, six album career, Lest we Forget: The Best of Marilyn Manson features some of the greatest rock anthems of the last decade. Opening with "The Love Song" from Holy Wood, it proceeds to the first of a handful of cover songs which have made it as singles. The decadent, beefed up version of Depeche Mode’s "Personal Jesus" may not vary much from the original but the band do it the appropriate Goth justice; "Tainted Love" adds a menacing, industrial-glam to the electric northern soul of Soft Cell’s version; and the one that broke them into the UK mainstream, "Sweet Dreams" by the Eurythmics sounds as good as ever. So, they do a good cover but it’s really the fists in the air crowd-pleasing anthems that back up the band’s iconic imagery. The high-energy signature tune, "Beautiful People" and tracks like "Disposable Teens" or "The Fight Song" typify the band’s intelligent approach to rock’n’roll posturing. While many may have all the albums already, Lest We Forget is the perfect addition for anyone who likes the odd song but was too fearful to delve any further in the world of Marilyn Manson. --Georgina Collins

only $8.76
Not Available
View Add to Cart