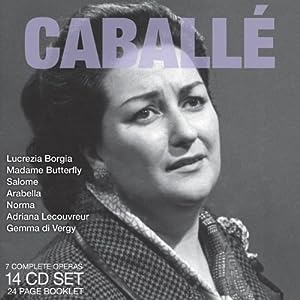 $99.99
As of 2022-09-24 18:15:17 UTC (more info)
Not Available - stock arriving soon
Buy Now from Amazon
Product prices and availability are accurate as of 2022-09-24 18:15:17 UTC and are subject to change. Any price and availability information displayed on http://www.amazon.com/ at the time of purchase will apply to the purchase of this product.
See All Product Reviews

Along with Maria Callas ("La Divina"), and Joan Sutherland ("La Stupenda"), Montserrat Caballé (b. 1933) took her place as one of the Big Three sopranos of the second half of the 20th century.

When Caballé made her New York debut in 1965, she was instantly heralded as "La Superba," a sure sign she had reached the pinnacle of diva fame. Caballé was especially noted for her pure legato, effortless phrasing, and ability to float soft high notes of breathtaking beauty. Her generosity and down-to earth humor have endeared her to her fans. In 1987, she astonished classical and pop fans alike by recording a duet of the song Barcelona with the rock star Freddie Mercury of the rock group Queen.