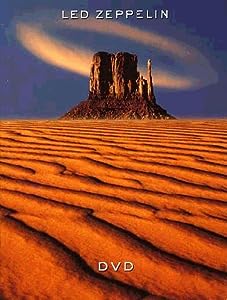 $29.98
As of 2023-02-01 04:08:57 UTC (more info)
Not Available - stock arriving soon
Buy Now from Amazon
Product prices and availability are accurate as of 2023-02-01 04:08:57 UTC and are subject to change. Any price and availability information displayed on http://www.amazon.com/ at the time of purchase will apply to the purchase of this product.
See All Product Reviews

Atlantic Records and warner Strategic Marketing are proud to announce a landmark event in music history- the release of the mother lode of Led Zeppelin live recordings: Led Zeppelin DVD, a two-disc set and How The West Was Won, a three CD set. The DVD and CD sets each contain entirely different material, so theres no overlap between the two releases. The DVD includes few performances which were ever filmed during the band's lifetime: London's Royal Albert Hall, five-night run at London's Earl Court, shows at England's Knebworth Festival, and songs from New York's Madison Square Garden. DVD Features include: Excerpts from Danish and French television performance, Austrailian television interviews with Robert Plant, John Bonham and John Paul Jones, Fan-shot bootleg performance of "Heartbreaker", Behind the scenes footage of Knebwort, and NBC interview with the band from 1970.

Exclamations of religious awe are in order. Legendary and long sought-after, this live Led Zeppelin collection is nothing less than the rock music equivalent of the Holy Grail. Quite simply, this is what all the fuss was about.

Given that they were the biggest band in the world, Zeppelin were notoriously camera-shy in their heyday. Their official filmic legacy until now has been just the fascinating but flawed The Song Remains the Same. While this new set presents some previously unseen footage from the same 1973 Madison Square Garden gigs, its real wonders lie in the earlier (1970) Royal Albert Hall footage and the later Earls Court (1975) and Knebworth (1979) concerts. Everything here looks and sounds new-minted, thanks to painstaking restoration and remastering of both audio and visual sources, a Herculean labor of love on the part of co-producer Dick Carruthers working hand-in-glove with Jimmy Page. Trawling through thousands of yards of previously unseen film and unheard tape recordings--some with missing visuals, some with missing audio--Page and Carruthers have chosen only the best possible footage available. They were also at pains to make the segments segue seamlessly so that the viewer is treated to what feels like a continuous concert--just sample the transition from a grainy Super 8 "Immigrant Song" (Sydney, 1972) to "Black Dog" at MSG.

Highlights? It's not hyperbole to say that every powerhouse minute of this collection (some 230 minutes of concert footage plus another hour and a half of extra DVD material) is a rare musical and visual treat. But hearing Page's violin bow work on "Dazed and Confused" in DTS or Dolby 5.1 is an experience not soon forgotten. --Mark Walker

A Night At The Opera [Remastered]