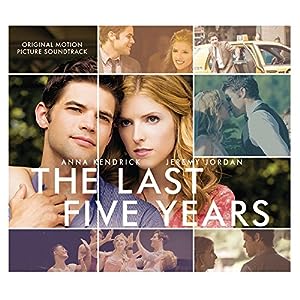 [The Last Five Years] marks a return to the sort of musical that was popular in Hollywood during the genre's Golden Age. The Hollywood Reporter

LaGravenese s musical is a vehicle for the mega-talented Kendrick and she nails every beat within it. RogerEbert.com
The film sounds fantastic! Variety

The Last Five Years stars Academy Award® nominee Anna Kendrick (Up In The Air, Pitch Perfect, Into The Woods) and Tony Award® nominee Jeremy Jordan (Newsies). It is the film adaptation of three-time Tony Award® winner Jason Robert Brown s acclaimed musical, written for the screen and directed by Richard LaGravenese (The Fisher King, Behind The Candelabra).
The film was released nationwide on 2/13/15 by RADiUS-TWC, a label from The Weinstein Company.

Jason Robert Brown s contemporary musical The Last Five Years, which premiered on stage in 2001, chronicles a love affair and marriage taking place over a five-year period. Jamie Wellerstein (Jordan) is a young, talented up-and-coming novelist who falls in love with Cathy Hiatt (Kendrick), a struggling actress. Their story is told almost entirely through song. Cathy s songs begin at the end of their marriage and move backwards in time to the beginning of their love affair, while Jamie s songs start at the beginning of their affair and move forward to the end of their marriage. They meet in the middle when Jamie proposes.

The Last Five Years (Original Motion Picture Soundtrack) is a 2-LP set that includes a download card. The full color package features stunning images from the film, full lyrics, and liner notes from both Brown (Parade, The Bridges of Madison County) and LaGravenese.

Spider-Man: Homecoming (Music from the M...