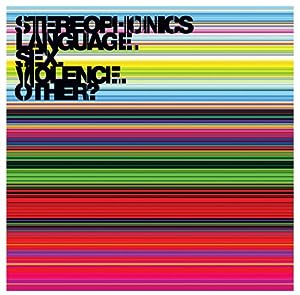 $5.32
As of 2023-02-03 03:19:32 UTC (more info)
Not Available - stock arriving soon
Buy Now from Amazon
Product prices and availability are accurate as of 2023-02-03 03:19:32 UTC and are subject to change. Any price and availability information displayed on http://www.amazon.com/ at the time of purchase will apply to the purchase of this product.
See All Product Reviews

Description of Language. Sex. Violence. Other? by V2 North America

We are delighted to stock the fantastic Language. Sex. Violence. Other?.

With so many on offer right now, it is great to have a name you can recognise. The Language. Sex. Violence. Other? is certainly that and will be a excellent purchase.

For this great price, the Language. Sex. Violence. Other? comes highly respected and is always a popular choice with lots of people. V2 North America have added some great touches and this results in great value.

Stereophonics' fifth album will inevitably provide more material for the band's critics, if only for the fact its title has clearly been rather lazily inspired from the back of a rental video case. The music within, however, is anything but laid-back: the employment of Argentinean drummer Javier Weyler, who replaces founding member Stuart Cable, sees the band venturing further along the hard-rock path that spawned previous denim-and-leather-clad tracks like "Moviestar". The first three tracks find frontman Kelly Jones is in downbeat mood, his vocals drawled and insouciant, and his lyrics distinctly sour--take the raging "Doorman", where he rails against some faceless bouncer with surprising and rather paranoid ferocity: "You like nothing more than to break my face/ You like to throw me out on the street!". Things sweeten towards the album's middle, providing two of the album's stand-out tracks: the chiming, electronic-tinged "Dakota" is a light, buoyant anthem that deserves to be a hit, while "Rewind" is a reflective moment that pricks memories of mid-period U2. But on the whole, Language. Sex. Violence. Other? isn't an album out to win new fans – it's an album that caters to the Stereophonics' rock faithful, and it's them who'll really dig it. --Louis Pattison

Walking on a Dream