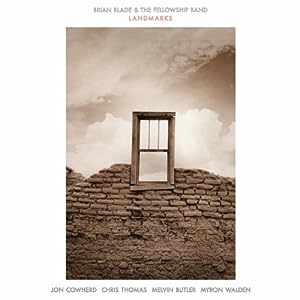 $11.52
As of 2021-07-28 19:06:36 UTC (more info)
Not Available - stock arriving soon
Buy Now from Amazon
Product prices and availability are accurate as of 2021-07-28 19:06:36 UTC and are subject to change. Any price and availability information displayed on http://www.amazon.com/ at the time of purchase will apply to the purchase of this product.
See All Product Reviews

Landmarks, the fourth recording by Brian Blade & The Fellowship Band, marks their return to Blue Note Records, released in cooperation with the Shreveport, Louisiana based label, Mid-City Records. Brian chose to record seven of the ten compositions in his hometown of Shreveport at Blade Studios which was opened in 2011 by Brian's older brother, the drummer and producer Brady Blade, Jr. Shreveport is an inland port city situated 40 miles south of Arkansas, 20 miles east of Texas, and 100 miles north of the Gulf Coast and its location makes it a sonic catchment basin for various Afro-diasporic strains gospel, rhythm-and-blues, the blues as such and various iterations of jazz and vernacular folk idioms that developed indigenously in the surrounding territories.

As on each prior Fellowship Band release, Blade and pianist Jon Cowherd refract these impressions into their own musical poetry, with an ear to the individualistic styles of Myron Walden (alto saxophone, bass clarinet), Melvin Butler (soprano and tenor saxophone) and Chris Thomas (bass). For the recording of Landmarks, Marvin Sewell and Jeff Parker are on guitars. Excepting the guitarists, The Fellowship Band has remained a unit since their eponymous 1998 debut and its 2000 follow-up, Perceptual, both on Blue Note. You can hear it in the cohesion and exploratory spirit of their collective and individual interpretations, orchestrated and propelled by the leader s in-the-moment beats and textures.