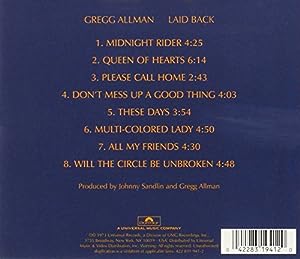 $11.98
As of 2020-09-29 22:12:43 UTC (more info)
Not Available - stock arriving soon
Buy Now from Amazon
Product prices and availability are accurate as of 2020-09-29 22:12:43 UTC and are subject to change. Any price and availability information displayed on http://www.amazon.com/ at the time of purchase will apply to the purchase of this product.
See All Product Reviews

By the end of 1973, the Allman Brothers Band seemed to have it all nailed down. They'd proven their mettle with a fine synthesis of blues, jazz, folk, and country influences; expanded upon it with the definitive Fillmore East set; and moved forward after the separate losses of guitarist Duane Allman and bassist Berry Oakley. The group's myriad strengths, in fact, might've been the reason that one of their most obvious gifts--Gregg Allman's pained, growling voice--was sometimes overlooked. Laid Back, Gregg Allman's first solo disc, seems in part an effort to gain a little more recognition. It worked, particularly given the strong radio response to its opening track, a loping remake of "Midnight Rider." Likewise, much of the album's remainder finds Allman tweaking the band's blues ("Queen of Hearts") and country sides (a cover of Jackson Browne's "These Days"); horns and gospelish backing vocals add to the personal, often mournful feel. Much more coherent than its dated cover art (an either childlike or blasted-out-of-his-gourd Gregg ignoring a blazing volcano) indicates, Laid Back is an often convincing version of the man's music. For Allman, it would get much, much worse before it would be this good again. --Rickey Wright

only $7.64
Not Available
View Add to Cart

Live From The Beacon Theatre (2CD/1DVD)