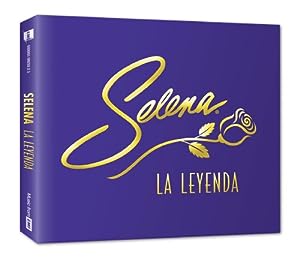 $13.66
As of 2022-11-24 17:41:28 UTC (more info)
Not Available - stock arriving soon
Buy Now from Amazon
Product prices and availability are accurate as of 2022-11-24 17:41:28 UTC and are subject to change. Any price and availability information displayed on http://www.amazon.com/ at the time of purchase will apply to the purchase of this product.
See All Product Reviews

La Leyenda will be available as a 4CD box set, a 2CD deluxe edition, and a single-disc hits collection. The box set includes an exclusive Selena charm and an extensive, bound book with personal messages from Selena's family, friends and fans, as well as rare photos and art from her family's collection, and the 2CD deluxe edition features an extensive booklet. All three configurations will also be available for download purchase, accompanied by digital booklets with the personal messages, photos and artwork.

The tragic events of March 31, 1995, the day American Tejano music's reigning queen, Selena, was murdered at the age of 23 in her hometown of Corpus Christi, Texas, remain vividly and sorrowfully imprinted in the minds of her family and other loved ones and her legions of devoted fans around the world. The CD and digital booklets for La Leyenda include heartfelt messages from many of Selena's most ardent supporters, including her parents, husband, siblings and other family members, friends and fans, recounting special memories, favorite songs and other personal recollections of the beautiful and talented singer.

Selena began performing professionally at the age of 9, backed by a second generation of her father Abraham's band, Los Dinos. The band's members included Selena's sister, Suzette, who played drums, her brother, Abraham, who played bass and wrote or co-wrote many of Selena's songs, and lead guitarist Chris Perez, whom Selena married in 1992.

In 1987, when she was just 16 years old, Selena was honored with two major Tejano Music Awards, for Performer of the Year and Female Vocalist of the Year. In 1989, she was the first artist to be signed by EMI Latin, and the following year, she released her self-titled debut album. Her next album, Ven Conmigo, released in 1991, was the first Tejano album to be certified gold by the RIAA, with U.S. sales totaling more than 500,000 copies.

Selena's 1993 concert album, Live, won the Grammy Award for Best Mexican-American Album. In 1994, she released the double-platinum certified Amor Prohibido, which held the #1 position on Billboard's Top Latin Albums chart for 20 weeks and was a fixture on the chart for 145 total weeks.

At the start of 1995, Selena was at work in the studio, recording a new album with English and Spanish lyrics. Dreaming Of You was conceived by Selena as a bridge to connect more closely with her many English-speaking fans. Tragically, Selena was killed before the album's release, just three weeks after she set the still-standing attendance record at Houston's Astrodome with her final concert. As people around the world were united in shocked mourning for one of popular music's most promising and brightest young stars, Selena's previously released albums re-entered the charts and she set new, as-yet-unbroken records for the most concurrent titles at the top of the Top Latin Albums chart with the entire Top 4 (April 22, 1995) and Top 5 (May 6, 1995).

Released in July 1995, Dreaming Of You debuted at #1 on Billboard's Top 200 Albums, Top Latin Albums and Latin Pop charts and was certified triple-platinum by the RIAA upon its release. The album reigned at #1 for 44 weeks on the Top Latin Albums chart, and its title track and "I Could Fall In Love" were high-ranking hits across multiple Billboard singles and radio airplay charts.

La Leyenda gathers Selena's top hits and fan favorites for a career-spanning celebration of her vibrant music and life. The box set includes 82 tracks on four CDs, grouped by musical style, language and version as follows: Disc 1: Cumbias y Pop; Disc 2: Tejano y Rancheras; Disc 3: English; Disc 4: Live. The 2CD deluxe edition features a selection of 30 stellar tracks from the box set, and the single-disc collection includes 15 essential tracks which are also contained in the box set and in the 2CD package.