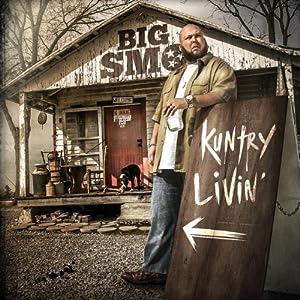 $11.76
As of 2023-01-14 15:02:13 UTC (more info)
Not Available - stock arriving soon
Buy Now from Amazon
Product prices and availability are accurate as of 2023-01-14 15:02:13 UTC and are subject to change. Any price and availability information displayed on http://www.amazon.com/ at the time of purchase will apply to the purchase of this product.
See All Product Reviews

Description of Kuntry Livin' from Elektra

We are happy to stock the excellent Kuntry Livin'.

With so many on offer these days, it is good to have a make you can recognise. The Kuntry Livin' is certainly that and will be a perfect buy.

For this price, the Kuntry Livin' comes widely respected and is always a popular choice with lots of people. Elektra have added some excellent touches and this equals good value for money.

Big Smo, a.k.a. Hick Ross and Boss of the Stix, will release his debut album Kuntry Livin’ on June 3rd on Warner Bros. / Elektra Records. Officially in stores the same week as CMA Music Festival 2014, the album is just the start of what's to come this year from Big Smo. Currently on the road playing shows and visiting radio stations across the country, the country ‘hick-hop’ artist is also starring in his own original A&E Network series produced by Brownstone Entertainment called "Big Smo" (working title). Giving an exclusive look into his larger-than-life personality, the series will follow Smo taking his uniqu estyle of music to new heights with the support of lifelong friends,loyal fans and most importantly, his beloved family. Being shot in his home state of Tennessee, production on the eleven half-hour episodes began in February with a premiere expected this summer.With over 15.2 million views on YouTube and already selling over 150,000 digital tracks to date, Big Smo has developed a sound and genre all his own containing pulse-pounding beats, passionate vocals and electrifying guitars set to lyrical subject matter that’s pure back-country reality, establishing the Tennessee native as “Hick Ross” among his followers. The self-proclaimed Boss of The Stix’ latest EP, Backwoods Whiskey -- currently available on iTunes -- features a remix of “Kickin’ It In Tennessee,” produced by Battleroy (Bruno Mars, Eminem). The high energy song, co-written by Battle, Casey Beathard and Smo, served as last season’s theme song for the NFL’s Tennessee Titans. The four-track EP gives fans a sample of the sound and vision that has brought Big Smo to the musical forefront as well as a taste of what to expect from his forthcoming debut album,Kuntry Livin’.