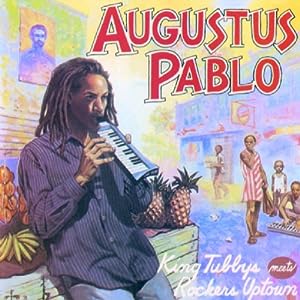 During the early '70s, a maverick Jamaican producer known as King Tubby (aka Osbourne Ruddock -- he was born in Kingston in 1941) embarked upon a series of pivotal recordings, ultimately creating a reggae offshoot called dub. First, he pared his forces down to a drum kit and bass and slowed the tempo until a bottom-heavy, primal heartbeat emerged. Over this framework, spare vocal and instrumental riffs emerged from layers of echoing reverb and artful distortion, erecting atmospheric soundscapes bound for infinity. This classic album is a primer for how Tubby could harness raw rhythmic power through his subtle, imaginative grasp of texture and dynamics. A potent rhythm team, including Robbie Shakespeare (one half of the famed Sly & Robbie combo) on bass, Earl "Chinna" Smith on guitar, and a rough-and-ready brass section, surrounds the organ-piano and clavinet (mouth-blown keyboard clarinet) of Augustus Pablo with hip, stylish Kingstonian street-bred attitude. --Christina Roden

Heart Of The Congos

Culture on the Front Line