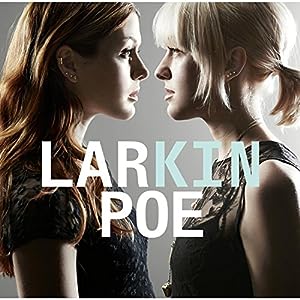 $145.22
As of 2021-03-26 14:57:46 UTC (more info)
Not Available - stock arriving soon
Buy Now from Amazon
Product prices and availability are accurate as of 2021-03-26 14:57:46 UTC and are subject to change. Any price and availability information displayed on http://www.amazon.com/ at the time of purchase will apply to the purchase of this product.
See All Product Reviews

'We have a very colorful family history,' explains lead singer/guitarist Rebecca, 23, who also plays mandolin and violin. 'There were a lot of creative, hot-headed, and intelligent branches that went against the grain in our family tree. Our paternal grandfather suffered from schizophrenia, while our great, great, great, great grandfather, Larkin Poe, was a Civil War wagon driver turned historian and a distant cousin to Edgar Allen Poe. Growing up with their crazy stories definitely shaded our perception of normal. As artists, I think some of those innate eccentricities, passed down from generation to generation, have been even further exaggerated in us!' Megan, 25, who contributes lapsteel and dobro to the line-up, chimes in, 'As sisters, we just wanted to pick a band name that had familial significance, so we decided to tip a nod to our ancestors and take on the name Larkin Poe.'
The Atlanta-based sisters celebrate that unique genealogy and their own eccentricities with their debut full-length album, 'Kin'; on RH Music, produced by Chris Seefried (Fitz and the Tantrums, Lana Del Rey) in Los Angeles and Damien Lewis (Rihanna, Rita Ora) in Atlanta.
After years of being fiercely independent (i.e., they self-released five EPs and toured for three years without label support), they decided to sign with RH Music. 'We signed with RH Music because they believe in our authenticity. They understand that we make music for no other reason than our need to make music and want to support that need,' explains Megan. 'They see our passion!' Others are clearly taking note of this passion as well, including Elvis Costello and Kristian Bush (of Sugarland). Both legends have taken the sisters out on the road to serve both as opening bands and backing bands; with Elvis Costello calling them 'gifted instrumentalists,' while Bush praises 'the poetry they make with their strings, words, and voices.'
With years of domestic and international touring under their belts, and a large and loyal fan base already in place, the sisters want their fans to know that 'Kin' is truly their coming of age project. 'This is by far the most genuine piece of work we ve ever released as a band,' says Rebecca. 'It s our story, written in our way, played and sung by us. We call it roots-rock'n'soul. It's our whole heart and soul mashed up into a musical form.'

No Mercy In This Land

only $4.74
Not Available
View Add to Cart