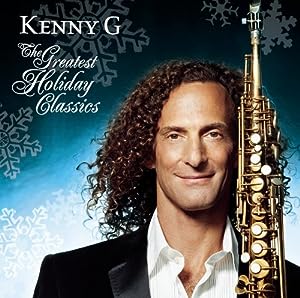 $4.99
As of 2021-07-31 02:03:53 UTC (more info)
Not Available - stock arriving soon
Buy Now from Amazon
Product prices and availability are accurate as of 2021-07-31 02:03:53 UTC and are subject to change. Any price and availability information displayed on http://www.amazon.com/ at the time of purchase will apply to the purchase of this product.
See All Product Reviews

This collection includes tracks from the best selling Christmas album ever Miracles and Kenny's other two holiday recordings Faith and Wishes. Four new tracks, one with Mannheim Steamroller and a bonus cut of 'I'll Be Home For Christmas', a homecoming mix to include holiday greetings from soldiers fighting in Iraq. Arista. 2005.

Doing what every good merchandiser does when there's no new real product for the Christmas season, Kenny G repackages his best stuff with a few new tracks. The Greatest Holiday Classics boasts pieces from previous holiday records, Wishes (2002), Faith (1999) and Miracles (1997), with five new cuts for a total of 16. To be sure it's a generous offering from the one guy in popular music who just might be contemporary America's Jazzman. Whether playing his acclaimed alto sax or blowing tenor, Kenny's signature tone is nearly unmistakable from anyone else's, perhaps, for his easily accessible phrasing and the limited improvisation he's willing to put on record. His focus has always been on delivering the song, rather than the possibilities for innovation, exploration and enhanced creativity that more adventurous players readily welcome in the jazz setting with any tune. One of the new pieces, a big band treatment of "Jingle Bell Rock" joyfully swings under Randy Waldman's arrangement and fellow his horn men seem to push G on his solo, while the other new works "My Favorite Things" and "I'll Be Home for Christmas" are fairly predictable fare. Even "Jingle Bells" is reduced to a slow tempo, with KG's trademark moody, saccharine strings and piano in the mix. But then, this is exactly the kind of Christmas tea many want against the often-overwhelming din of the holiday rush. Martin Keller

Vampyre : Symphonies from the Crypt by M...