Keep Me In Your Heart For A While: The Best Of Madeleine Peyroux 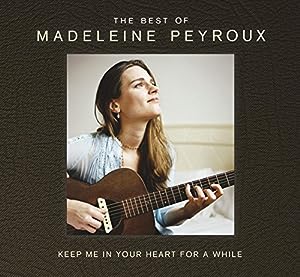 Keep Me In Your Heart For A While: The Best Of Madeleine Peyroux

$9.99
As of 2022-09-27 12:58:34 UTC (more info)
Not Available - stock arriving soon
Buy Now from Amazon
Product prices and availability are accurate as of 2022-09-27 12:58:34 UTC and are subject to change. Any price and availability information displayed on http://www.amazon.com/ at the time of purchase will apply to the purchase of this product.
See All Product Reviews

Keep Me In Your Heart For A While: The Best of Madeleine Peyroux will be the very first compilation release in the singer/songwriter's 18-year career, including favorites not only from her Rounder catalog, but also tracks from her Atlantic and Decca/ Emarcy catalogs. Additionally, the album will include one previously unreleased song--title track and Warren Zevon cover, 'Keep Me In Your Heart' which appeared in 2011's independent film Union Square. Liner notes by former Atlantic Records A&R man, Yves Beauvais, complete the package.

Peyroux, whose voice is often compared to that of Billie Holiday's, was discovered while in her early twenties, when Beauvais spotted her at a New York club. He recalls the precocious singer's set to be 'some of the most exciting, viscerally moving minutes of my music-listening life.' Beauvais signed Peyroux to Atlantic and co-produced her 1996 debut Dreamland. Peyroux's husky voice enchanted audiences and critics alike, but it was 2004's Careless Love a wide-ranging collection of covers from Elliott Smith to Leonard Cohen-penned tracks that proved to be a milestone release for the artist, fetching mainstream recognition and marking the start of a four-album-long collaboration with producer Larry Klein (Joni Mitchell, Tracy Chapman, Herbie Hancock).

The American-born Peyroux, whose career began as a teen busker on the streets of Paris, is a regularly-touring, active artist, who has often returned to her love of busking between albums.

The Hissing of Summer Lawns