Just What I Needed: The Cars Anthology 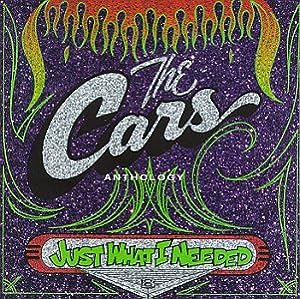 Just What I Needed: The Cars Anthology

$79.98
As of 2022-07-26 23:20:12 UTC (more info)
Not Available - stock arriving soon
Buy Now from Amazon
Product prices and availability are accurate as of 2022-07-26 23:20:12 UTC and are subject to change. Any price and availability information displayed on http://www.amazon.com/ at the time of purchase will apply to the purchase of this product.
See All Product Reviews

45 tracks from the most popular "new wave" band of 'em all, including unreleased early demos and rare, non-LP single sides! Includes classics like My Best Friend's Girl; You're All I've Got Tonight; Let's Go; Shake It Up; You Might Think; Tonight She Comes , and more, all annotated!

Despite musical roots that branched from the Velvets to Steely Dan and the likes of then-new wave icons Roxy Music, the Cars never strayed far from the crucial, hook-conscious, three-minute pop song sensibility which made them one of the most successful and long-lived radio staples of the '70s and '80s. As well as being catchy, Ric Ocasek's best songs are also ironic--"Good Times Roll" and "Just What I Needed" both contain winking lyrical twists. With Ben Orr vocalizing the sweeter material, guitarist Elliott Easton's and keyboardist Greg Hawke's often-quirky musical embroidery, and drummer David Robinson's rhythmic propulsion and fashion sense, the Cars became the self-contained rock juggernaut--or, if you prefer, new wave arena band--documented on these two discs.

The hit singles and select album cuts stretch from their improbably rich debut through moodier efforts like "Panorama" and the vibrant, yet satisfying "Shake It Up" and "Heartbeat City." The CD is well seasoned by a cache of previously unreleased demos, B-sides, and outtakes. The earliest of these ('77 demos of "Take Me Now" and "Cool Fool") demonstrate that the band's sound was intact before they met their first multiplatinum producer, while later rarities (playful covers of Iggy's "Fun Time" and the Nightcrawlers' "Little Black Egg") underscore their eclectic, seemingly incongruous tastes. --Jerry McCulley