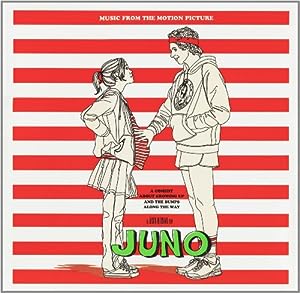 $15.78
As of 2022-12-03 08:14:34 UTC (more info)
Not Available - stock arriving soon
Buy Now from Amazon
Product prices and availability are accurate as of 2022-12-03 08:14:34 UTC and are subject to change. Any price and availability information displayed on http://www.amazon.com/ at the time of purchase will apply to the purchase of this product.
See All Product Reviews

Original soundtrack to the 2008 coming-of-age comedy directed by Jason Reitman (Thank You For Smoking). The narrative centers on whip-smart Juno (Ellen Page, in a breakthrough role), a teenage girl faced with an unplanned pregnancy from an afternoon with the charmingly unassuming Bleeker. Juno finds her unborn baby the perfect set of parents in Mark and Vanessa Loring (Jason Bateman and Jennifer Garner), an affluent suburban couple who are eager to adopt. Along with the total support of her parents, Juno conquers her problems head-on, displaying a youthful exuberance that is both smart and unexpected. Features tracks from Kimya Dawson, The Kinks, Buddy Holly, Sonic Youth, Belle & Sebastian, Mott The Hoople, Cat Power and others. Rhino.

Director Jason Reitman's warm, compassionate comedy about an unanticipated teen pregnancy was not only a dark horse Oscar® nominee for Best Picture, but saw this soundtrack CD top the charts just two weeks after its release. It's a collection wherein quirky, generation-spanning folk and rock choices are rooted in something more rewarding than mere eclecticism for its own sake--namely the sense of unlikely, hopeful humanity that Kimya Dawson's core songs bring to its slightly askew axis. Dawson's spotlight performances here range from a handful of decidedly twee solo cuts, to the album's key "Anyone Else But You," (her 2001 duet with Adam Green released under the Moldy Peaches moniker,) and a couple more upbeat oddballs by the singer's more recent Antsy Pants project. That effusively innocent musical core is augmented with a pair of eminently sympathetic tracks from Scottish twee-pop magnates Belle and Sebastian, then seasoned with a mix of catalog tracks that spans eras from Buddy Holly to Sonic Youth--utilizing styles as diverse as the Kinks, Mott the Hoople, and Velvet Underground--that nonetheless manage to bolster the film's tender emotions with a graceful, (if skewed,) charm that's hard to resist. --Jerry McCulley


Director Jason Reitman made a whole slew of great decisions with his justly lauded film Juno. One of them was the choice of music he used, which gave potent voice to this soundtrack companion. While all of the songs added energy and emotional atmosphere to the scenes, it was the inclusion of numerous numbers by Kimya Dawson that subtly enhanced the wonderfully drawn title character. Dawson's homemade immediacy and faux stream-of-consciousness lyrics felt like songs that the character Juno would listen to, or create. Dawson's seven (one recorded with Adam Green, her partner in the Moldy Peaches) are interspersed among a dozen other selections which straddle generations--Buddy Holly, The Velvet Underground, Mott the Hoople, Sonic Youth, and Cat Power--and moods, sequenced to flow like one delightful radio program. --David Greenberger

An American Tail: Music From The Motion ...