Joy in My Soul: The Complete Sar Recordings 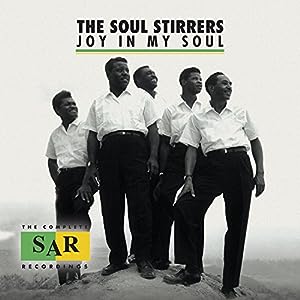 Joy in My Soul: The Complete Sar Recordings

$13.88
As of 2022-11-27 15:53:20 UTC (more info)
Not Available - stock arriving soon
Buy Now from Amazon
Product prices and availability are accurate as of 2022-11-27 15:53:20 UTC and are subject to change. Any price and availability information displayed on http://www.amazon.com/ at the time of purchase will apply to the purchase of this product.
See All Product Reviews

The complete recorded output of the seminal gospel group on the SAR record label, which was co-owned by former Soul Stirrer and R&B/soul legend Sam Cooke and former Pilgrim Traveler J.W. Alexander. The recordings span the years 1959 to 1964 and cover the period after their Specialty recordings and up until Sam Cooke s untimely death. The 2 CD set contains the classic gospel album, Jesus Be A Fence Around Me as well as their second SAR album, Encore!! With The Soul Stirrers, both produced by Sam Cooke. Highlighted tracks include, Looking Back, Listen To the Angels, Amazing Grace, Wade In The Water, Oh Mary, Don t You Weep and the Sam Cooke penned Jesus Be A Fence Around Me, Stand By Me Father and Lead Me Jesus.

The song Time Brings About A Change is featured in the Golden Globe nominated film Selma, starring Oprah Winfrey, Cuba Gooding Jr., David Oyelowo and Common. The film chronicles the tumultuous three-month period in 1965, when Dr. Martin Luther King, Jr. led a dangerous campaign to secure equal voting rights in the face of violent opposition. The epic march from Selma to Montgomery culminated in President Johnson signing the Voting Rights Act of 1965, one of the most significant victories for the civil rights movement.

Life Is A Song