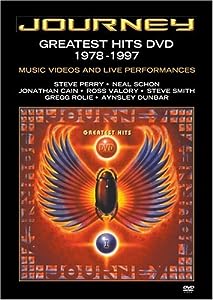 $11.98
As of 2022-11-28 22:01:28 UTC (more info)
Not Available - stock arriving soon
Buy Now from Amazon
Product prices and availability are accurate as of 2022-11-28 22:01:28 UTC and are subject to change. Any price and availability information displayed on http://www.amazon.com/ at the time of purchase will apply to the purchase of this product.
See All Product Reviews

A compilation of the band's top music videos, also including live footage.

It will be many years before Journey's music will be known as anything but soupy '70s arena rock and embarrassingly overwrought '80s pop. But that day will come: the songs and the playing are just too good for the scorn and ridicule to endure forever. Journey: Greatest Hits DVD 1978-1997 will do little, however, to hasten the band's salvation. In fact, if it weren't such a gift to those who love the music, a case could be made for suppressing the disc's video content, so unimaginative is most of the directing and so damning is the attire (or lack thereof).

But even if sweaty guys running around in tight jeans and no underwear isn't really your thing, the disc has its treats. There's MTV nostalgia, pure and simple--"Separate Ways (Worlds Apart)," with its mimed quayside performance and strutting high-heeled model, is perhaps the quintessential "What were they thinking?" video. We also get exciting glimpses of the early band (with keyboardist Gregg Rolie passing the lead-vocal torch to newcomer Steve Perry) kicking out classics like "Feeling That Way," "Lights," and "Just the Same Way." Many of the songs feature live audio as well as video, and it's here, most notably in "Who's Crying Now" and "Stone in Love," that lead guitarist Neal Schon cuts loose with some extended licks. An unexpected pleasure is 1996's heartfelt ballad "When You Love a Woman." The guys are aging gracefully, Steve Smith's drumming is better than ever, and the video itself boasts the most tasteful production of the bunch. --Michael Mikesell

Riding With the King by Reprise / Wea